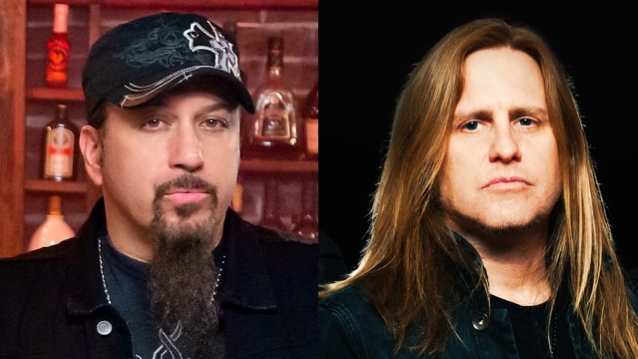 ADRENALINE MOB guitarist Mike Orlando has collabored with LAST IN LINE vocalist Andrew Freeman and W.A.S.P./ex-ANGRA drummer Aquiles Priester on a project called BLACKEN THE SKY. The band's debut album is currently being finalized for a tentative late 2020 release via Frontiers Music Srl.

Orlando discussed BLACKEN THE SKY's upcoming LP during a recent interview with Sonic Perspectives. Speaking about his working relationship with Frontiers, which is known for putting acclaimed musicians together to form collaborative projects, Mike said: "I'm just finishing up an album right now — literally as we speak. I should be ending this on June 1st. And I'm really excited about this. It's a heavy album — it's a little more symphonic, but it's metal and hard rock. It's myself, the amazing Aquiles Priester on drums, and the unbelievable Andrew Freeman on vocals. And Junior Carelli from my band, ex keyboard player of a band called NOTURNALL that I play in in South America, which he is an incredible keyboard player. And the stuff is really heavy and really great. Huge vocals — Andrew is killing it. And it's called BLACKEN THE SKY."

In early 2019, Orlando said that he didn't know if ADRENALINE MOB will ever do anything again, nearly three years after the accident that resulted in the death of the band's bassist, David Zablidowsky.

At the time of the accident, ADRENALINE MOB was touring in support of "We The People", which was issued in June 2017 via Century Media. The disc was the first ADRENALINE MOB release to feature Zablidowsky and drummer Jordan Cannata.

LAST IN LINE recently entered the studio to begin recording it third album. The follow-up to 2019's "II" is tentatively due next year via an as-yet-undetermined record label.

Some of the early recording sessions for LAST IN LINE's new LP took place in January at Steakhouse studio in North Hollywood, California.