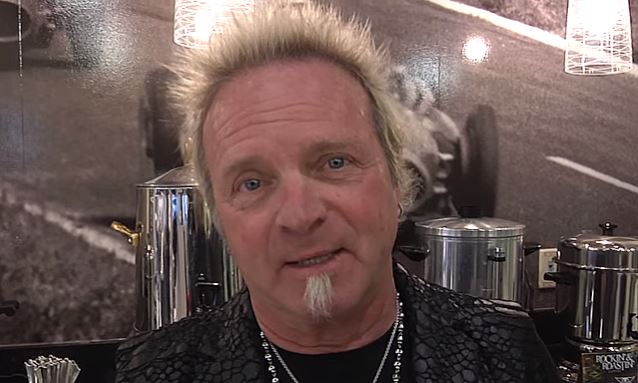 AEROSMITH drummer-turned-coffee-mogul Joey Kramer soon will be rockin' and roastin' across the airwaves as a guest deejay on 100.7FM WZLX, Boston's Classic Rock. From Wednesday, June 29 through Friday, July 1, Kramer will become "DJ Kramedog" during the morning drive program from 6:00 a.m. until 9:00 a.m. The special three-day airing will culminate with a live broadcast from Kramer's soon-to-open Joey Kramer's Rockin' & Roastin' Café in North Attleborough, which will double as the grand opening celebration of Kramer's new coffee sanctuary.

Kramer, whose coffee company Rockin' & Roastin' products can be found at thousands of locations throughout New England, will take to the radio with WZLX's Cha-Chi Loprete. Fans can tune in over-the-air, online at www.wzlx.com or via the Radio.com app for mobile devices.

During his guest DJ-ing stint, Kramer will be game for true coffee talk with listeners dialing in while also conducting interviews with rock-star friends like AEROSMITH's Tom Hamilton and Brad Whitford. "DJ Kramedog" also will chat with locally based celebrities such as actor Kevin Chapman, car kingpin Ernie Boch, Jr., politico Scott Brown, comedian Lenny Clark and more. Additionally, Kramer will curate playlists of his all-time favorite songs spanning the decades, as well as Rockin' & Roastin' giveaways throughout the three mornings.

On Friday, July 1, the final day of Kramer's guest DJ-ing whirlwind will take place at the official ribbon cutting celebration of his first brick and mortar venture in Massachusetts: Joey Kramer's Rockin' & Roastin' Café, located at the intersection of Routes 1 and 1A in North Attleborough. Open to the public, lovers of java and rock 'n roll will come together to witness "DJ Kramedog" sign off of the radio waves and christen his new 1,500 square foot coffeehouse with a rock-star edge.

Rockin' & Roastin' is available in over 2,500 grocery, wholesale and convenience stores throughout New England, including Stop & Shop, Shaw's, Star Market, Hannaford, Big Y and Roche Bros. It also is available in hundreds of restaurants, hotels, educational institutions and resorts in the region, in addition to being the "official fresh brewed coffee" at House Of Blues venues nationwide. In December, Kramer opened Rockin' & Roastin' Café & Restaurant - At the Mountain, a family-friendly coffeehouse, eatery and live entertainment venue located at Sunday River Mountain in Maine.