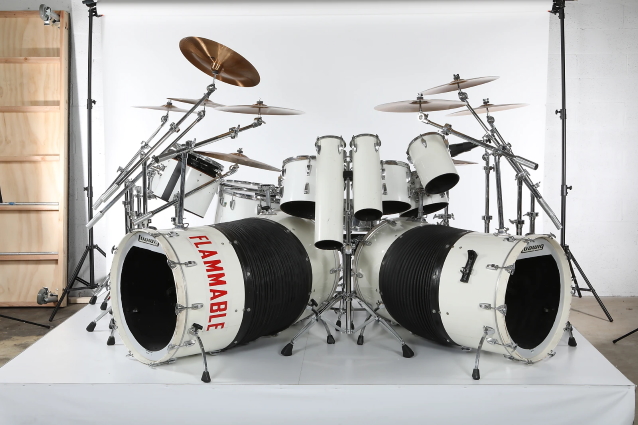 Alex Van Halen's stage-played complete drum kit, which he used on VAN HALEN 1980 "Invasion" tour, is available for purchase from Reverb.com for $275,000. A portion of proceeds will go to charity.

The white Ludwig kit (see video below), which was used on more than 100 shows during the tour in support of VAN HALEN's "Women And Children First" album, was previously displayed at Cleveland, Ohio's Rock And Roll Hall Of Fame And Museum starting around nine years ago. Alex used the drum kit not only as a percussion instrument, but also as a visual art form. Working with various drum manufacturers, Alex custom-designed enormous and elaborate drum kits that reflected the group's musical sensibility and provided Alex the platform to shine. The kit features two custom articulated bass drums, each more than five feet long, in addition to an impressive array of floor toms, tom-toms, a gong and myriad cymbals.

VAN HALEN was one of the biggest rock bands in the country in the 1980s, with hits like "Runnin' With The Devil", "Dance The Night Away", "Hot For Teacher", "Panama" and "Jump". The group, which later featured Sammy Hagar on vocals, was inducted into the Rock And Roll Hall Of Fame in 2007.

The Van Halen family moved to Pasadena after emigrating to the U.S. from the Netherlands in 1962.