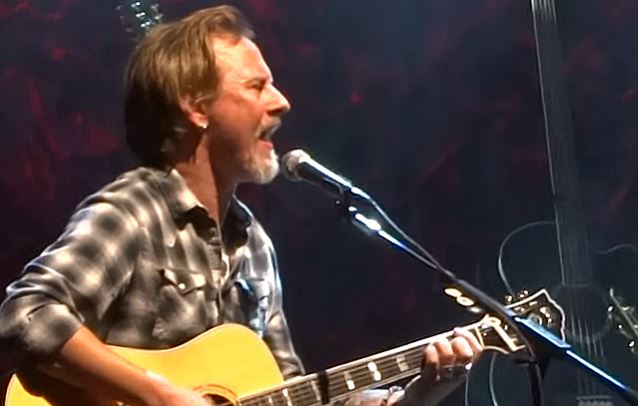 DEFTONES frontman Chino Moreno spoke to U.K.'s Metal Hammer magazine about the band's forthcoming album, which is tentatively due on September 25. He stated about the CD's musical direction: "In a lot of ways, that's the hardest question. I feel like each album is a snapshot of a time and place of our band. When I listen to, say, 'Around The Fur', it takes me right back to that time and place. You just have to capture the vibe of the time. I think we did that on this record, too. It's not like a typical riff-rock record. It's not full of ballads, either. This one is a challenge. We made a point of thinking about what we have learned from songwriting over the years to structure stuff a little differently. Believe me, this isn't a case of, 'Oh, that worked last time, so let's just do it again.' We definitely wanted to avoid doing that."

As previously reported, DEFTONES has tapped Jerry Cantrell (pictured; ALICE IN CHAINS) to lay down a guest guitar solo on the follow-up to 2012's "Koi No Yokan". Cantrell told Metal Hammer about how his contribution came together: "DEFTONES and I have known each other for years, and we're also under the same management. Chino sent over the song file and I thought it was really great, cool and moody, so I worked on it that night and threw something down. He sent me a file of them jamming the song live, I sent it back with the idea I laid down, and Chino thought it was perfect. I waited until they got back in the studio and then came in and laid it down. So, it was pretty easy, and I think it's going to be a great song."

He added: "Chino's a really talented guy and an amazing frontman, and they're a band that has a sound that's uniquely their own."

According to Moreno, sixteen songs were written for DEFTONES' new CD, which was once again produced by Matt Hyde (SLAYER, CHILDREN OF BODOM, MONSTER MAGNET, WINDS OF PLAGUE).