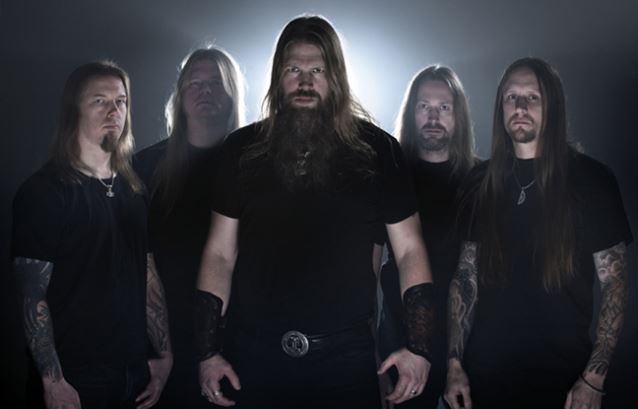 Mark Holmes of Metal Discovery conducted an interview with drummer Fredrik Andersson of Swedish death metallers AMON AMARTH on November 13 in Manchester, England. A couple of excerpts from the chat follow below.

Metal Discovery: You've experienced your biggest sales and highest ever chart positions with the new record, "Deceiver Of The Gods", so how good did that feel when the general industry trend is a decline in record sales?

Fredrik: Well, we've been fortunate enough to have had the success chart from our first album. The next album has always done a little bit better than the last one, so we don't really see any big differences from album to album. I mean, it's not really that important; the chart positions aren't really that important to us. The only benefit to us is, I guess, to put us on the map for promoters to get shows booked and stuff like that. People know that we will pull a crowd.

Metal Discovery: You've done three albums in a row with Jens Bogren producing but you came over [to England] to Derbyshire to record with Andy Sneap for the latest one. Why did you decide to change producers at this stage?

Fredrik: I think we felt that, after three albums, we needed some fresh blood into the system and we felt that we had reached the level of what we could reach with Jens Bogren. So we needed something new and some new input onto the music and the band. Obviously, Andy Sneap has been in our mind for many years, I think even before we started working with Jens, but it didn't work out schedule-wise for whatever reason. So, this time, it worked out and it was the right time.

Metal Discovery: It was also mentioned in press materials for the last album, "Surtur Rising", that you were aiming for a more "aggressive and rougher sound" too. Looking back now, having worked with Andy, do you think Jens fell short of the aggression and raw energy you were trying to capture?

Fredrik: Well, I think we had a little bit of a disagreement on the last album with which direction we wanted to go. And that's also one of the reasons why we felt we needed to move on, because he took decisions that the rest of the band weren't really okay with. It was like having a sixth member but the sixth member was taking charge, basically. We didn't feel comfortable with that.

Metal Discovery: You had the legendary Messiah Marcolin [CANDLEMASS] guest on the track "Hel", so how did that come about?

Fredrik: I think he and our singer [Johan Hegg] met many years ago and just became friends, so he came up to one of our shows in Stockholm a couple of years ago and we ended up on the bus, drinking all night and talking about doing a duet with him and Johan. And nothing really happened about it but, when we wrote the music for this song, it has this doomy feeling and we felt that would be the perfect opportunity to call him in. And he was still up for it.