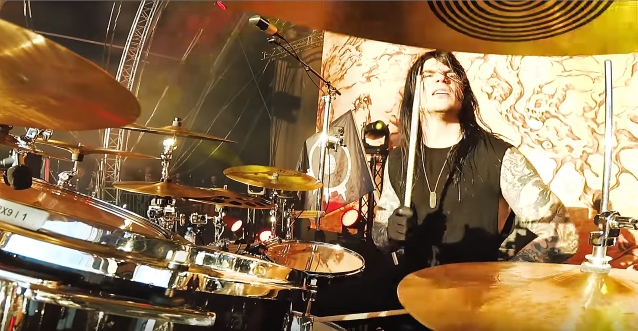 Multi-camera drum-cam footage of ARCH ENEMY's Daniel Erlandsson performing the song "Nemesis" with his bandmates at this year's Tuska open-air festival in Helsinki, Finland can be seen below (courtesy of Antti Kangasaho).

Earlier this year, Erlandsson was asked by Australia's Insert Review Here to name his "least and most favorite things" about traveling and touring. He said: "My most favorite thing is always the show usually — that's what you look forward to the whole day and that's why we're here, really. Sometimes you have bad shows and even if you do, it's still the most exciting part of the day and we always somehow manage to have fun and make it work. The least favorite — I don't know… You get used to sleeping on the tour bus and not getting the food you want to eat all the time, which is a minor thing, really, when you think about it. You get used to the little things that you would normally take for granted. Some things can be a bit tedious, but you learn to accept them along the way."

Erlandsson also talked about the massive amount of views and streams that ARCH ENEMY has been getting on platforms like Spotify and YouTube. He said: "Well, it is the current trend and you have to use that as a vessel to kind of like get our music out to people. Seeing that we get such a good reaction towards our music videos on YouTube, it's definitely a great tool for us to be able to reach out to people and to be able to get new fans who might not have heard us before. So I think it's great in that sense, and it's doing well for us — we can see the benefits of that when we tour. It's not all about album sales, even though that's really good when we sell a lot of albums; we won't complain about that."

ARCH ENEMY's latest album, "Will To Power", was released in September 2017 via Century Media Records. Co-produced by guitarist Michael Amott and Erlandsson, the disc was mixed and mastered by longtime collaborator and friend Jens Bogren (OPETH, AT THE GATES, DIMMU BORGIR). The LP's cover artwork was designed by Alex Reisfar.