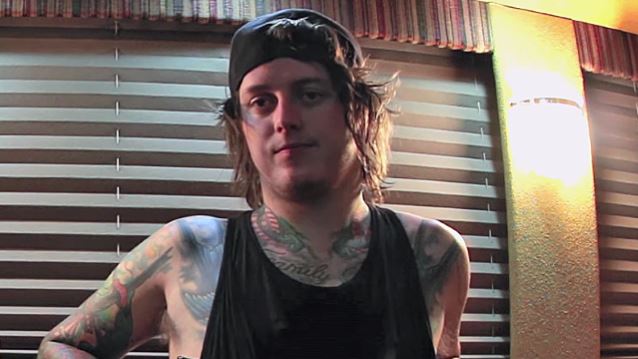 BryanStars recently conducted an interview with guitarist Ben Bruce of the British metalcore band ASKING ALEXANDRIA. You can now watch the chat below. A couple of excerpts follow (transcribed by BLABBERMOUTH.NET).

On how the ASKING ALEXANDRIA fans have received the band's new lead singer, Denis Shaforostov:

"Honestly, my mind's been blown. The first show, I was really nervous before we went on. I was, like, 'Oh my God. This is, like, the scariest thing in the world. I'm going on stage with someone new. It's the first time. I don't know how anyone's gonna react. Are people gonna like it? Are they gonna accept him?' And I was, like, 'Are you nervous?' And [Denis] was, like, 'Nah.' I was, like, 'What do you mean 'nah'? How can you not be nervous, man?' And he's, like, ''Cause it's gonna be amazing.' And I was, like, 'All right, dude. We'll see.' And it was fuckin' amazing, man. The whole tour, it was just insane — just the response from the crowd, the support that we've been given. It really is mindblowing. I remember at Rock Am Ring [festival in Germany], we went on at 2 a.m.; we were the last band to close out the festival. And I was, like, 'There's no one gonna be sticking around 'till 2 a.m. What the hell's going on?' And I walked out on stage and there's an arena three tiers full of fucking people; there was, like, twenty thousand people there. And I was just, like, 'Oh my God! This is insane. So it's a little bit overwhelming, but I can't complain."

On how he felt before ASKING ALEXANDRIA's first show with Shaforostov:

"There were, like, a million emotions running through my body, especially before stage. Like I said before, I didn't know how people were gonna react. I didn't know if people were even gonna like us without [former ASKING ALEXANDRIA singer] Danny [Worsnop] and all that shit. And I've been friends with bands who've lost their frontman, and it's a big deal. And I've seen them walk out on stage and just be booed and the reception hasn't been good at all. And that just kept running through my mind: 'This is our first show. This could be the end of ASKING ALEXANDRIA. Or it could be the start of a whole new life,' obviously, which is what I was hoping for. And as soon as I went on stage — literally within about five seconds — I was just, like, 'This is the start of something spectacular.' The crowd was just insane. The energy was insane. Being on stage with Denis didn't even feel weird; it just felt completely natural. I was, like, 'This is sick.' I was watching him, and he just had the biggest fucking shit-eating grin on his face the whole fucking time, man. I was, like, 'That's sick. He's having fun on stage. That's refreshing.' 'Cause Danny wasn't having fun on stage with us. So it was nice to see, man. And then everything just got better from there."

On what ASKING ALEXANDRIA has accomplished on its upcoming album that is different from what the group has done before:

"We've got a new fucking singer! That in itself… I don't know… The album is not out, so I don't know what we've accomplished. We've never gone into a studio thinking, 'We wanna write this, this, this, this.' We just always go in and write whatever feels right. I'll sit down and just play, and whatever comes out, that's what this album's gonna sound like. But one thing that was a huge, huge difference — which was really refreshing — is Denis was really involved with the writing. He would critique me, he would give me ideas, he'd be, like, 'I've heard you do better. Do better.' And he really, really pushed me, whereas Danny would just kind of not do anything. I'd send him the songs and he'd be, like, 'That's shit. I don't like it. It's too heavy. And then, 'If I have to do it, I'll do it.' So there wasn't much interaction between me and Danny. But with Denis, he was very hands-on. He wasn't in the country for a lot of it, so we did a lot of Facetime calls, a lot of texting, a lot of mobile calls and stuff. He was really involved, so I think that's just made for a better and more well-rounded album, especially because he was a fan of the band before. So I'd send him something and he'd be, like, 'Dude, I've heard you do better than this. This is not your best work,' which was awesome. So I definitely think this is the best ASKING ALEXANDRIA record that we've ever written. I think old fans are gonna love it. I think new fans are gonna love it. I just don't see how you can't. I hate sounding cocky, but it's so good, I listen to the songs and I'm singing them — they're stuck in my head — which is something I've never done with our records before."

On whether it's true ASKING ALEXANDRIA had completed an album's worth of material before Worsnop left the band:

"Yeah. I flew our engineer out, Sam Graves, to [the Rockstar Energy Drink] Mayhem [Festival], and I spent the whole summer writing the record. And Danny was, like, 'I don't want any heavy songs.' He wasn't into heavy songs. So I was, like, 'That's fine. I'll write music that I think Danny's gonna love.' And it was just… What I ended up writing, I think the songs were great — I really do, and I still love the songs — but it wasn't ASKING. It sounded like a shitty AVENGED SEVENFOLD. And I love that band. And we were on tour with that band, so I took so much inspiration from them. And I was, like, 'Maybe Danny will be happy doing this, because it's more rocky. He'll get to sing more. There's no breakdowns.' And I don't even think he really likes that, honestly, which was kind of disheartening. But it just wasn't ASKING. It was a great record, but it wasn't us. I was trying to write for someone that didn't wanna be in this band anymore, so it didn't sound like this band."

On how ASKING ALEXANDRIA's forthcoming album compares to some of the band's earlier efforts:

"I think there are some huge arena-rock songs — just massive songs that I can just see in an arena just thousands of people singing every word from start to finish. So they're not heavy, but they're just great, great songs. But, for the most part, the record's actually a lot more similar to [2011's] 'Reckless & Relentless'. We've brought a lot more of the electronic influence back. Obviously, [2009's] 'Stand Up And Scream' is very electronic-driven, and we've brought a lot of electronics back. Not in the same way — it's not techno or anything like that — but there's a lot of electronic sounds and ambience and stuff, which is really cool. I don't know… We wanted to feel young again. So I sat down with Joey [Sturgis, producer] and I listened to 'Stand Up And Scream' from start to finish, and I listened to 'Reckless & Relentless' from start to finish, and I was, like, 'These albums are sick, man. I miss that raw energy, that aggression, that passion that we had.' So I think we've brought a lot more of that back into this new record."