ATREYU and MOTIONLESS IN WHITE have announced details of a co-headline tour, which will see the bands traversing across North America this spring. "The 2019 Spring Invasion Tour" will feature support from special guests WILSON. The 18-city will kick of April 15 at Pensacola, Florida's Vinyl Music Hall and continue through May 9, where it will conclude with a performance at Knoxville, Tennessee's The Mill & The Mine.

ATREYU is continuing to tour in support of its seventh full-length album, "In Our Wake", which was released last October through Spinefarm.

Following a two-year tour cycle for 2015's "Long Live", ATREYU regrouped in Southern California and started sharing ideas for what would become offering number seven. Ceremoniously, they all agreed it would be the right time to reunite with producer John Feldmann who famously helmed "Lead Sails And Paper Anchor".

The band recorded in two chunks bookended by drummer/vocalist Brandon Saller's touring obligations for HELL OR HIGHWATER. Working out of Feldmann's Los Angeles studio, they embraced this new approach as the producer still made them"wonderfully uncomfortable and willing to push harder," according to singer Alex Varkatzas.

MOTIONLESS IN WHITE's latest album, "Graveyard Shift", came out in 2017. The disc featured a guest appearance by KORN frontman Jonathan Davis on the single "Necessary Evil".

Last year, MOTIONLESS IN WHITE parted ways with longtime bassist Devin "Ghost" Sola. Filling in for him at the band's recent shows has been the group's former guitarist, Thomas "TJ" Bell. 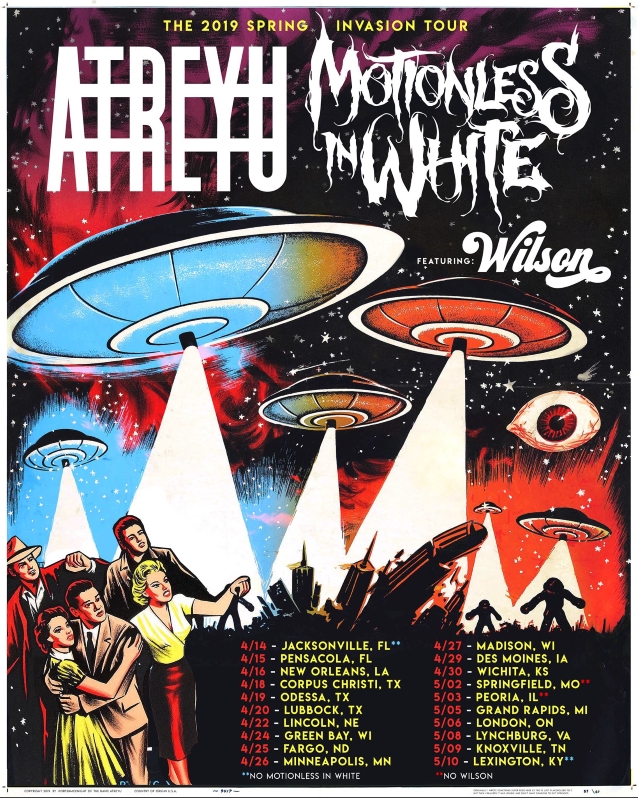