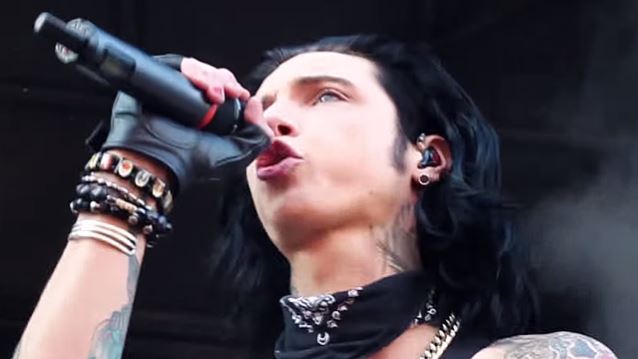 Caliber TV has uploaded multi-camera video footage of BLACK VEIL BRIDES' June 21 performance at the Ventura, California stop of the Vans Warped Tour. Check it out below.

BLACK VEIL BRIDES vocalist Andy Biersack told MikeJamesRockShow.com about the band's plans for the immediate future: "We're gonna keep touring the rest of the cycle on this record and then go back and probably make another record in the winter… We're headlining the Warped tour this year, so that's really exciting. And then, after that, we're gonna do maybe one more tour. We might come back [to England] before the end of the year. And then we're gonna take a couple of months off and probably start making a new record."

He continued: "We put out, I guess, coming up on our fifth record, and… So, I mean, we really like to write records and record records. I mean, it's fun for us. So, every time we think, 'Oh, after this one, we'll take a couple of years off,' six months go by and I'm, like, 'Ah, let's get back in the studio and make music.'"

BLACK VEIL BRIDES will release its first-ever concert DVD and Blu-ray, "Alive And Burning", on July 10. The cover artwork for the set was designed by the band's longtime friend and previous album cover illustrator Richard Villa.

"Alive And Burning" will feature footage of BLACK VEIL BRIDES' sold-out hometown show in Los Angeles at the Wiltern Theater on November 1, 2014. The concert was part of the group's inaugural Halloweekend event as part of "The Black Mass" tour. The DVD was directed by Casey Tebo, known for his work on the acclaimed AEROSMITH documentary "Rock For The Rising Sun".

"Black Veil Brides" was helmed by producer Bob Rock, whose resume includes albums by METALLICA, MÖTLEY CRÜE, THE CULT and many others.