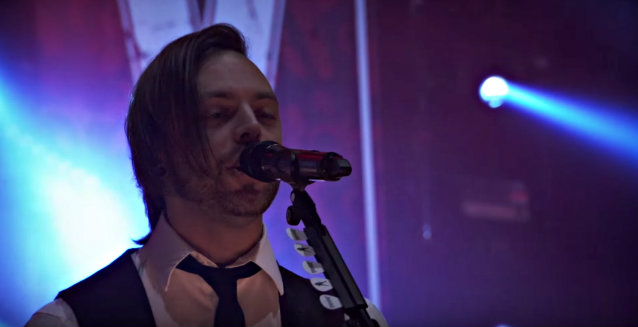 The last two nights of BULLET FOR MY VALENTINE's 2016 U.K. tour took place on December 9 and December 10 at the O2 Brixton Academy, with the second night seeing the band playing its debut album, "The Poison", in full on its tenth anniversary year. Both shows were captured by Live Here Now and are set for release as "Live From Brixton: Chapter Two" on July 28. Nights one and two are both available on limited-edition double CDs, plus deluxe 2 x DVD and Blu-ray editions (which include both evenings' performances). Finally, "Night Two: Performing The Poison" in its entirety is also available on triple red LP. All formats are available across specially priced bundles.

Video footage of BULLET FOR MY VALENTINE performing the song "Her Voice Resides", taken from from "Live From Brixton: Chapter Two", can be seen below.

In a 2016 interview with Metal Obsession, BULLET FOR MY VALENTINE frontman Matt Tuck stated about the the fact that it has been more than a decade since "The Poison" first came out: "Yeah, it's gone in the blink of an eye. The lifestyle of the band has been so hectic. It really has just gone by. When you think of the reality of how long that's passed since then, the journey we've been on since that record is incredible. We've achieved the unachievable in many ways and twelve years later we're still very relevant in heavy metal. Very, very shocked how quick it’s gone."

Asked which song he was most looking forward to performing from that record at the Brixton show, Tuck said: "I don't know. Probably 'Her Voice Resides', the opener. It was the opening soundtrack to our career in a way. Having that intro play at our first headline shows and launch into 'Her Voice Resides'. They were very exciting times in our lives. I think as soon as that intro rolls, we haven't used it since 2006 or 2007. Having that intro in the PA system and people screaming in the background will be a very goosebumpy moment for us."

BULLET FOR MY VALENTINE recently commenced work on material for its sixth album, tentatively due before the end of the year. The disc will be released through the band's new label home, Search And Destroy, the imprint launched in 2014 by Spinefarm and international artist management company Raw Power Management.

BULLET FOR MY VALENTINE's latest song, "Don't Need You", was released as a standalone single last November.

The band's last studio album, "Venom", came out in August 2015. The CD marked BULLET FOR MY VALENTINE's first release since the departure of longtime bassist Jason James and addition of Mathias (formerly of REVOKER).

BULLET FOR MY VALENTINE drummer Michael "Moose" Thomas took a temporary leave of absence from the band last year to spend time with his wife, as they awaited the birth of his first child. He has since been replaced on the road by Jason Bowld (PITCHSHIFTER, AXEWOUND).