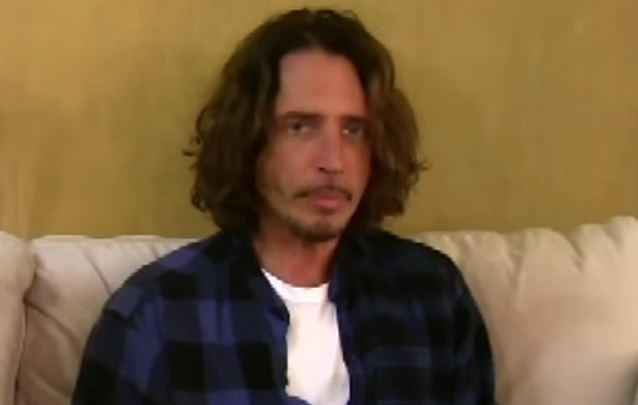 On September 21, Frankie DiVita of the 95.5 KLOS radio station conducted an interview with SOUNDGARDEN singer Chris Cornell at the Warner Grand Theater in San Pedro, California. You can now watch the chat below. A couple of excerpts follow (transcribed by BLABBERMOUTH.NET).

On whether he identifies himself more as a solo artist now:

"I think that this type of touring, [playing] solo [and] acoustic for several years now and [being] kind of a one-man show, and drawing all of the songs that I've written for previous bands and solo albums and then movies and all that together under one umbrella and one approach, which is acoustic songs, they all kind of suddenly get into the same family and then it makes sense, and then I can sort of feel like, 'Oh, that's my solo artist identity.' Because it is a weird thing… Normally, when somebody becomes famous for being part of a band, and, in my case, fairly prolific band, and then what ended up being two fairly prolific bands, to take the individual out of that is really hard. It's almost like, 'Oh, I'm going to see a show from that guy that fronts those two bands. It's not, 'I'm going to see that guy's show.' And you're sort of expecting to see that guy kind of do a revue. And there's so much of what I've done, and three different bands, and so much different solo stuff that, stylistically, is all over the place, it's sort of difficult to connect the dots to what all that is, and I think these acoustic shows have done that for me. And so 'Higher Truth', really, is the album that was born from that, the album of original music that was born from that, more or less in the style of that."

On how he leaves the solo identity at the door when he goes back to working with SOUNDGARDEN:

"Well, because the band is part of the solo identity, I don't really have to think about it. What happens is I'm thinking about writing songs and I'm thinking about co-writing songs, and I'm also thinking about writing songs for this image, this attitude, this understanding that I have of what SOUNDGARDEN is. For me, it all comes down to escapism, and that's how I approached being a fan of music from [when I was] a very little kid. I wanted to go into my bedroom and listen to records. I didn't really wanna listen to records with other people so much. I didn't mind sharing, but that wasn't really the point. The point was that I was alone listening to music and laying in bed, closing my eyes and getting lost in the experience of it. And so, to me, whether it's my own records or my own song or SOUNDGARDEN or AUDIOSLAVE or TEMPLE OF THE DOG or whatever it might have been or is now, to me, it's this fictitious environment. It's like some universe that is created as though I'm a novelist creating characters and a town and an environment placed in a time, and then, when I'm writing the songs, or playing the songs, or listening to the songs, I get to go into that world. So if it's SOUNDGARDEN, it's that SOUNDGARDEN world. And we get to sort of continue to create it. Now we're writing as if we're creating new parts of that universe."

On how far he is into the songwriting process for the next SOUNDGARDEN album:

"We started working right away. The funny thing about putting out albums is… 'Higher Truth', I finished writing that a long time ago… it was months and months ago. And then I was making the record. So, as far as writing songs, I've moved on since then."

On where SOUNDGARDEN plans to record the next album:

"I did 'Higher Truth' in a different studio than… I worked in a studio that SOUNDGARDEN has never worked in. And I'm not really sure how we'll record or where we'll record, but it'll probably be something similar to what we are comfortable with."

The SOUNDGARDEN frontman kicked off the "Higher Truth" acoustic tour on September 18 in San Diego, California at the Balboa Theatre, stopping at famed North American venues like the Walt Disney Concert Hall in Los Angeles, the Ryman Auditorium in Nashville, Massey Hall in Toronto and more before winding down on November 4 in Phoenix, Arizona at the Orpheum Theatre.