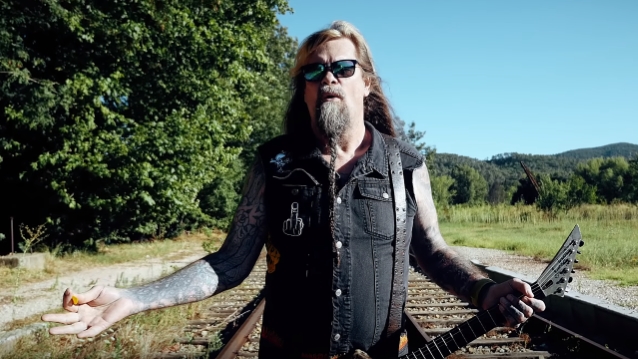 Chris Holmes has revealed that he almost walked out on W.A.S.P. in the middle of the band's 1989 "The Headless Children" world tour. In a chat with Eonmusic, the guitarist also talked about his return to the shock rockers in 1997, and how he "hated" the comeback album that he recorded with them.

Speaking of why he almost quit the shock rockers, Holmes said: "There was some really bad conflicts on the road, and I was lied to, and I almost left on the road, because it's not about the money to me. I got lied to from somebody, so I was going to leave in the tour."

However, it was only following advice from W.A.S.P.'s tour manager that Chris reconsidered his position. "He said, 'Chris, if you leave now, you'll get sued for all the money," Holmes recalled. "He goes, 'You'll be working at McDonald's in ten years still trying to pay off the debt to Sanctuary [Management]."

He continued: "So I finished the whole tour, and once I was done, I was gone. I didn't want to play anymore. I didn't really care what Blackie [Lawless, W.A.S.P. leader] did after that.

Although Holmes returned to the band for the industrial-tinged "Kill.Fuck.Die" album in 1997, he says that he only played a small part in its creation. "I really didn't play that much on that," he said. "I played, I think, two solos. I had some influence on a song or two writing lyrics."

Going on to slate the release, the guitarist said: "That album was done because somebody — I won't say his name — was scared of Marilyn Manson taking his spot in rock and roll. It was a really stupid album to do. I hated it."

Holmes will release a new EP, "Under The Influence", in December. A new full-length album will follow a year later.

"Under The Influence" was recorded in Cannes, France, where Holmes has lived since 2014.