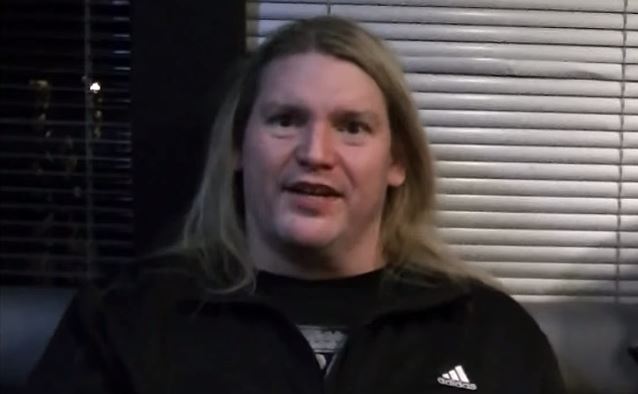 MetalRecusants.com conducted an interview with CORROSION OF CONFORMITY drummer Reed Mullin before the band's March 12 concert in Colchester, United Kingdom. You can now watch the chat below. A couple of excerpts follows (transcribed by BLABBERMOUTH.NET).

On performing full CORROSION OF CONFORMITY shows with guitarist/vocalist Pepper Keenan for the first time since 2006:

Reed: "It was, like, automatic. [It was like the old days] right off the bat. Pepper flew up from New Orleans. He'd been sitting at home listening to stuff and whatever, but the three of us — Mike [Dean, bass/vocals], Woody [Weatherman, guitar] and I — hadn't practiced any of the tunes. And it was just, like, 'Bam!' Because, I think, we toured so much before, too, and had played together for so long that the 'lizard brain' had started clicking in. But also, Mike Dean, Woody and I had been playing together since we were little kids, too. You know what I mean?! We kind of learned how to play music together, 'cause we didn't really have bands before C.O.C. So we slowly learned how to play music together. Actually, Woody taught me how to play drums. I got a drum kit for Christmas, and Woody showed me the RAMONES beat, and our singer at the time taught me the punk rock beat. That's all you needed to know back then."

On playing songs that hadn't been performed in a decade or longer:

Reed: "I'm enjoying the hell out of it, and I think we all are, and I think the audiences are too. Like I was talking about [earlier in the interview], when we were playing 'Albatross', [I was looking at the crowd], like, 'Wow! This is insane!' But I think we feel the same way, 'cause we're fans of the music ourselves. I hadn't played with these guys since 2001 — something like that. They did some touring when I was out of the band for a little bit. But, yeah, it's been a while. It's been, like, 15 years, I think."

CORROSION OF CONFORMITY's first European trek with Keenan back in the fold since 2006 mark the first time the "Deliverance" lineup of the band has played together since 2001.