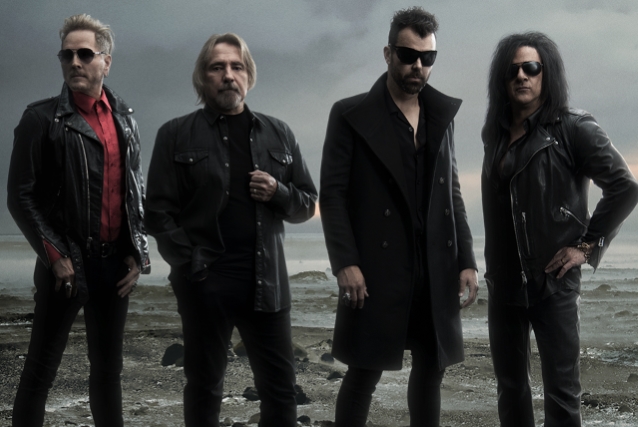 "We had about 13 or 14 songs written, and we were about to go into the studio when the pandemic came along," he said. "And now Steve won't leave his house [laughs], and so I think the singer [Franky Perez] is doing something else, and Matt is doing something also." Butler went on to say DEADLAND RITUAL had "some really good stuff" that he "might rescue" and put on a future solo album.

DEADLAND RITUAL released two songs, "Down In Flames" and "Broken And Bruised" in late 2018 and early 2019. Both tracks, which were produced by Greg Fidelman (METALLICA, SLIPKNOT), were made available via Sonik Riot Records/AWAL powered by Kobalt.

Geezer previously said that he initially had no plans to join another band after SABBATH completed its "The End" farewell tour.

"Well, I retired after the last SABBATH show," he said. "I just traveled and did everything that I wanted to do when I was retired for a year. And then I got fed up watching the TV every day. And I started writing stuff again, 'cause that's what you do. I've been doing it for 50 years, so it's in your blood. You can't just stop, especially when it's your hobby as well. And I just got back into writing stuff. I was planning on doing another solo album, a GZR thing. And I got a few songs together for that. And then Matt got in touch with me about DEADLAND RITUAL."

Asked what appealed to him about being in a band again, Geezer said: "It's what I've known since I started when I was 16; I was in a band. When you're doing solo stuff, it's just you writing stuff. There's nobody to bounce off, and I really missed that. It's good to have people saying, 'That's good. That'll work.' Or, 'That's not so good.' And I missed having that. The guitarist that I worked with in GZR, he's just moved to the East Coast and he's got other things on his plate at the moment. With DEADLAND RITUAL, everybody's local, so it's easy to get together. And you don't have to plan months in advance to do an album or write songs. If I feel like writing a song today, I call up Steve, go around to Steve's house, and we try something."

DEADLAND RITUAL made its live debut in May 2019 at the Troubadour in West Hollywood, California.