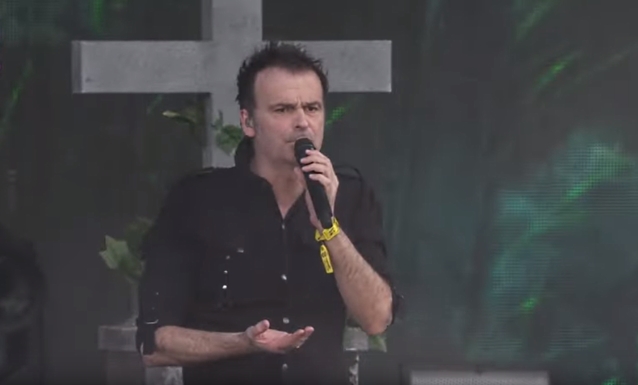 Professionally filmed video footage of DEMONS & WIZARDS, the side project of ICED EARTH mainman Jon Schaffer and BLIND GUARDIAN singer Hansi Kürsch, performing on June 21 at Hellfest in Clisson, France can be seen below.

During a press conference at Hellfest, Schaffer and Kürsch spoke about the progress of the recording sessions for DEMONS & WIZARDS' third album. Asked by one media outlet if fans can expect to hear an evolution in the sound and musical direction of DEMONS & WIZARDS' next LP, Hansi said: "There will be a huge evolution in sound. That's naturally by the 20 years in between the first album and this one. And even the 'Touched By The Crimson King' album has been recorded in 2005, so there were so many developments, I would be surprised if there's no evolution. And having five engineers involved is also making a difference, even though we go back to Jim Morris, who's going to do the final mixing, and we have done some work with him already.

"The [songwriting] process — has it changed? I don't think so," he continued. "We exchanged ideas. We were burning. That's the good thing about songwriting — you always try your best; you don't wanna do second best. It doesn't matter with [which] artist you're working and when you're working on it, it is always to deliver the best. And I have to say by what we have accomplished so far… The songs are finished in the composing; I just have to do some singing… But other than that, all the stuff is done. And I think we have 11 songs, and I personally would say they're all top notch. They define what DEMONS & WIZARDS is, for sure, but you can also figure that there are, like, 15 years in between this album and the last album, and we have changed as persons; we've become different characters. The approach was the same in many ways. Of course, Jon had a little break where he gathered energy and provided me with the stuff, but then it was [the same type of] situation as we have had in the past, and that just went perfect."

Added Jon: "This cycle was different, because at the end of [ICED EARTH's] 'Incorruptible' album cycle, I went out to the mountains in Arizona and hiked for a month and spent one week with my [ICED EARTH] bandmates, because we were going on hiatus. So the five of us went out into the desert and stayed together, and then I stayed three weeks by myself and got an enormous amount of power from that and energy from just staying away from the music business and not talking to management. I talked to Hansi about twice, and other than that, I was completely disconnected from everybody, and it was a really great thing. So when I got back to songwriting, it was, like, 'Boom!' Everything went really fast, and I knew there was really, really strong material, and it's good. And the arrangements came, and everything came, and I started sending Hansi stuff. I knew, from an instrumental standpoint, that this is some of the best material I've ever written. And then when he added his stuff on top, it was, like, 'Okay, we have something really special for the people.' And at the end of the day, I actually don't care if you guys love it, because I do, and [Hansi] does. And that sounds harsh, but that's art, and it's honest — it's actually honest. And it's real, and it is actually some of the best material I've written in my entire life, from my standpoint, and what [Hansi has] done, it's killer. And people are gonna be shocked, I think — very pleasantly shocked — by what's coming, honestly."