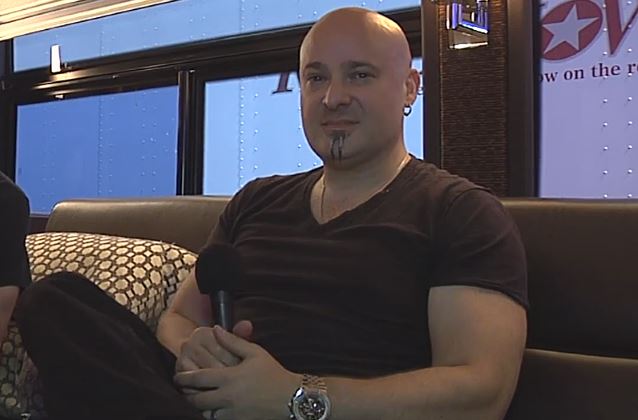 Mike Karolyi of iRockRadio.com recently conducted an interview with DISTURBED frontman David Draiman. You can now watch the chat below.

Asked how the terrible events that have dominated the headlines in the last few months have affected the way the members of DISTURBED view their safety and security on the road and how they approach their touring life, Draiman said: "It's definitely affected us as far as how we view security. No doubt, we take it quite a bit more seriously than we have in the past given the nature of the current environment.

"You can't let fear distate your actions, and you can't live in that sort of state, but it's always good to be prepared and good to be cautious."

He continued: "As far as the political environment, it really has no bearing on what we do. There was plenty of political fodder for the taking prior to starting this cycle, things that led up to the creation of this record [DISTURBED's latest album, 'Immortalized']. It's only gotten more entertaining since. So the circus that is currently ongoing is definitely something that we sit back and laugh, cry and are terrified by, but it is what it is; that's the spectacle. That's what the media shoves in your face 24-7, when they're not trying to distract you from other important things going on in the world, of course.

DISTURBED version of SIMON & GARFUNKEL's "The Sound Of Silence" has been a huge hit for DISTURBED, with Paul Simon sharing his approval of it publicly after watching the band perform the song on "Conan" and also exchanging e-mails with Draiman.

DISTURBED's record label, Warner Bros., credited the song's popularity to the video for "Silence", which was released in December 2015. To date, the clip has been seen more than 82 million times, a record number of views on YouTube for the group.

DISTURBED's cover of "The Sound Of Silence" can be found on "Immortalized", which became the band's fifth effort in a row to enter the chart at No. 1 — a feat shared only with METALLICA and DAVE MATTHEWS BAND.