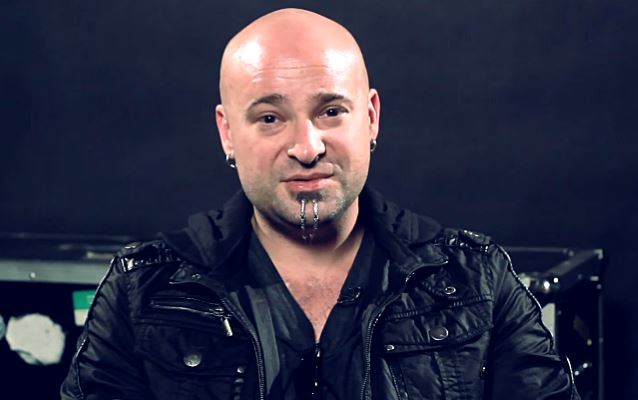 DISTURBED singer David Draiman says that he is"done with social media" after dealing with Twitter trolls who have baited him about his sometimes-controversial views.

Draiman, who is the son of Israelis and the grandson of Holocaust survivors, spent much of the last few months linking to articles by conservative and pro-Israel blogs and has often used his fame to speak out against anti-Semitism. This led to frequent heated exchanges with his followers on Twitter, some of whom believe that Israel is not blameless in the ongoing conflict with Palestinians.

Draiman — who has extensive family in Israel, including his brother, Jerusalem-based folk rock and ambient musician Ben Draiman, as well as his grandmother — has just deleted his @davidmdraiman Twitter account, explaining to the 93X radio station in Minnesota: "I'm done with social media, personally. And it had nothing to do with the [upcoming release of the new DISTURBED] record. It happened to be coincidental, but it had nothing to do with the record."

He continued: "Social media has become a playground for trolls, a playground for these people who prey on one another. You can't get anything decent done on there anymore; you just open yourself up to constant attack. And I'm just done with it. I'm done with it. I hope that the couple of years of my being as involved in it as I was meant something to people. I hope that they gleaned something from it, or took something away from it, or at least were entertained or something, because, now, I'm becoming a recluse."

Draiman added: "At the end of the day, what people want from me is to get up there on that stage and make them feel powerful and give them a release for an hour and a half or two hours every once in a while. And if I'm still able to do that, hopefully I'm still making people happy."

DISTURBED's first new album since 2011, "Immortalized", is due out August 21. The CD is available for pre-order everywhere and follows 2010's gold-certified "Asylum", DISTURBED's fourth consecutive No. 1 on The Billboard 200 album chart.

In addition to 15 new songs — including 12 on the album and three more on the deluxe edition — "Immortalized" contains a cover of SIMON & GARFUNKEL's "The Sound Of Silence".

DISTURBED has yet to announce tour plans behind the new record.