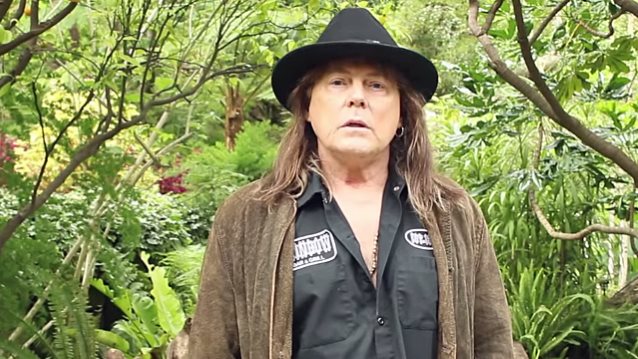 DOKKEN frontman Don Dokken was interviewed by Canadian rock journalist Mitch Lafon for a recent edition of the "One On One With Mitch Lafon" podcast (Facebook page). You can now listen to the chat in the YouTube clip below. A couple of excerpts follow (transcribed by BLABBERMOUTH.NET).

"Everybody knows about him. He's a lead singer. That's what he does; he's a lead singer. And he was doing background vocals with me, 'cause he has a very high voice and he was hitting the notes that I couldn't hit. You know, I'm older, I lost that range, I don't have that range. Actually, I'm singing way better these days; my voice is much, much better than it used to be. But it's nice to have another strong… He loves going on the road with us and rocking out — playing rock shows for two hours. He's in the band permanent. We're just getting ready to do new press photos. And we're having fun. We've got a lot of shows booked. We've already got thirty shows booked this summer; it's a lot of shows."

On how his pre-show routine has changed over the years:

"Now I have to warm up for an hour — at least an hour. When I get ready before a show, I don't talk at all during the day and I sing very light at soundcheck. And then an hour before I go to the show, in the hotel room, I turn on the shower, sit on the toilet, close the door and let the whole bathroom completely fill up with hot-water steam, purge my sinuses, cough up phlegm, and then start doing my scales — same thing all singers do. And start slowly singing higher and higher and higher and higher. And plus, I've taken vocal lessons over the years by famous vocal coaches like Ron Anderson. And he's taught me how to hit higher notes without straining my voice. In the '80s, when I was at my peak, I guess you could say, I didn't warm up, I didn't do anything; I just smoked a cigarette and I'd go on and sing, and I sounded great. But I was younger, and my voice was… I don't know… It's just the way it was. Plus, in the '80s, we were doing fifty, sixty, seventy shows a year. I mean, we were really… We were playing four or five in a row, day off; four or five in a row, day off. We played fifty shows with AC/DC in Europe in eight weeks. So it's like a muscle; you're singing every day, so your voice gets stronger. But then again, it only takes that one note one time on stage when I'm not paying attention and I sing too hard, I press down too hard on my vocal cord, and it's over. My voice is hurt and it needs to rest, and I can't rest it, because I have to go do four more shows in a row when I've hurt my voice, and it just gets worse and worse and worse and worse. So I've learned I have to be careful now. I have to respect my voice, I have to take care of my voice. Because, otherwise, the fans go on the Internet and say, 'Hey, I just saw DOKKEN last night and Don sucked.'"

On whether he finds fan criticism on the Internet frustrating:

"It's frustrating, but it's honest. I mean, if I'm not good, I'm not good. But what the fans don't understand is, they expect you to sound exactly like you did on the record, which we recorded thirty years ago; they expect you to sound amazing every night. They don't take into consideration, you're driving in a snowstorm, you're in a tour bus with heat going — dry heat — you're talking and doing interviews on the radio in the morning, and it takes its toll on your voice. But they don't really care. They're just, like, 'Look, you'd better be amazing every night, or we're gonna critique you and say bullshit.' So they don't understand what it's like. I mean, we're going to Sweden Rock [Festival] — ten-hour flight. We play Sweden Rock, and the next day, after the show, we have to fly for four hours to Athens, Greece, and that same day we have to fly to Thessaloniki and do a show. I'm gonna be completely burnt out. But I'll try to take a nap, sleep for two or three hours, get up, warm up my voice, and hopefully it'll be okay. And the next day I've gotta fly back to Athens and do another two-hour show. It takes its toll on you, and the fans don't really give a shit."