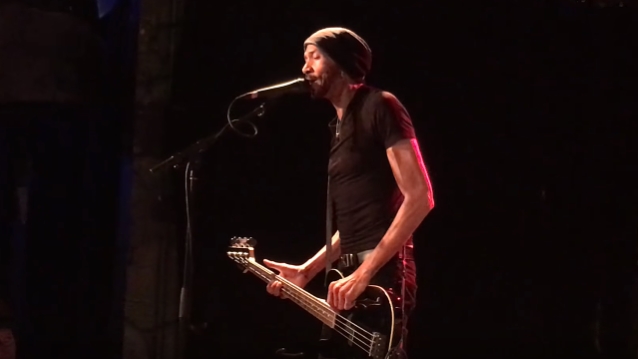 Doug "dUg" Pinnick, Ty Tabor and Jerry Gaskill of the veteran rock trio KING'S X recently spoke with Heavy New York. The full conversation can be viewed below. A few excerpts follow (as transcribed by BLABBERMOUTH.NET).

On whether the band follows a certain template when they write songs:

Jerry: "I personally don't think that as a band, we necessarily have a formula. As we write songs individually and come together, there's no telling how it's going to happen. We're as surprised as anybody."

On Pinnick's process for writing lyrics:

Doug: "Lyrics come along, but they're in, like, a line — something that's kind of profound or kind of cool, and then I'll take that line and make a chorus and expound on it into the verses. Usually, it's music first, and then I listen to the music and try to find [a] focal piece in it, instead of the opposite way. If I make up a melody line and then try to put music to it, it's really simple, and it doesn't go anywhere. The music's not interesting. I need the music to try and create something that's going to be interesting."

Doug: "It's sort of like painting a picture — just take your paint and throw it at the wall, and when it lands, you kind of work around it until it's a piece of artwork. That's how we usually make music. There's never a preconceived idea as far as I can remember."

Ty: "Sometimes, the song is not even written yet until we're in the studio, and we just do it. 'Go Tell Somebody', we wrote in about an hour, and had the whole basic tracks recorded. It took no time."

Doug: "A lot of people think that our records are concepts, and they're not — they're the furthest thing from it. When we get done with a record, then we look at it and listen to it and go, 'Oh, that's the picture today,' and it looks like a concept, because we make music as to where we are at the moment. Whatever we're feeling, whatever we're going through, it sort of gets into the music, and then that record comes out, and that's our voice at the moment, however we're feeling."

Ty: "A song is never finished. You could always keep tampering with it. At some point, you just go, 'I think I like this,' and you just stay with it."

Doug: "Even when you're mixing, it's like, you've got to stop sometime."

On whether the band adjusts their set lists based on the crowds they're playing for:

Ty: "I can't really remember doing that. I'm sure that it might have been a concern of ours on certain tours — will they like what we do? I remember wondering if [the] PEARL JAM crowd would like us at all, and they were absolutely fantastic. I think we just go be ourselves and wait to see what the reaction's going to be."

Doug: "If we're opening for somebody that's, like, really, really heavy, the set might be a little bit heavier than normal. We might not put more ballads in; we might take them out so we can just give it to them then walk off the stage. Pretty much, we're still going to do what we do, which is hopefully blow your brains out and [you'll] walk away going, 'Oh, I like that.'"

On the benefit of side projects:

Ty: "It helps [us] keep writing, so that the sea of nuggets and little things that you're keeping up with and recording becomes more vast to choose from when it comes time to work on music together. A lot of times, we'll have incomplete ideas, and then everybody gets inspired by it and it becomes something. For me, doing all that side project stuff just keeps me always writing so that there's now just a sea of fragments and songs that have never been finished."

On the group's early days:

On getting inspired by other artists:

On the KING'S X live experience:

Ty: "There are all these sections of songs that we drag out and go places, and every single night, they are different. Depending on your emotion and how you feel [referring to Pinnick], sometimes 'Over My Head' is radically different than the next night. We call that jumping off the plank, [or] walking the plank. As a band, we like to do that, which makes you vulnerable to mistakes and to screw[ing] it up. But the payoff for when things go right is why I'm up there, personally. That's the whole reason I play — when you're scared to death and it goes right. It's the emotion of the moment and the night, and whatever mood whoever's in, you're going to musically play with that coming out, which changes the soup flavor every night."

Ty: "We're writing new music with the intent of getting together next year, seeing what happens."

KING'S X has been sidelined by several health scares in recent years, including Pinnick's two hernia operations and two near-fatal heart attacks suffered by Gaskill. The group has continued to perform live on a regular basis, however, and was recently announced as one of the performers on next year's Monsters Of Rock cruise.