Power metal legends DRAGONFORCE will embark on a U.S. headlining tour in March 2020. Support on the trek will come from UNLEASH THE ARCHERS and VISIONS OF ATLANTIS. The tour will begin on March 5 in Phoenix, Arizona and end on March 21 in Brooklyn, New York.

Tickets go on sale tomorrow (Friday, December 20) at 10 a.m. local time, and will be available via individual venues.

Brittney Slayes of UNLEASH THE ARCHERS states: "We can't wait to hit the road with DRAGONFORCE and VISIONS OF ATLANTIS next spring! This tour is gonna melt some faces for sure! We've got some new material to try on for size, and our new EP 'Explorers' to play live for the first time ever. We took 2019 off from touring to write the new album, so we are beyond stoked to get back on the road and party with our fans again! The year of tour has begun!"

Clémentine Delauney of VISIONS OF ATLANTIS adds: "This is the opportunity of a lifetime! We are so excited to present our latest album to our American Sailors, so huge thanks to DRAGONFORCE for taking us on board with them! We're also delighted to meet up and tour with our labelmates UNLEASH THE ARCHERS! See you in March, Sailors, as we finally sail to your shores across the Atlantic!"

* no VISIONS OF ATLANTIS

DRAGONFORCE is continuing to tour in support of its eighth full-length, "Extreme Power Metal", which came out in September. The effort is available as a CD digipak, 2LP+DL and digital. Produced in Los Angeles, California by Damien Rainaud at Mix Unlimited, "Extreme Power Metal" was also recorded, in part, on guitarist Herman Li's livestream channel on Twitch with participation from the fans.

This past summer, DRAGONFORCE parted ways with longtime bassist Frédéric Leclercq. Playing bass for the group at some of its recent shows has been Rainaud.

Regarding "Extreme Power Metal", Li said: "This album again combines the best of DRAGONFORCE in an even bigger, more epic way than we have ever done before. We are so excited for fans to hear it." Following the departure of Vadim Pruzhanov from the band last year, the keyboards of this new album were performed by Coen Janssen of symphonic metal titan EPICA, bringing a new dimension into a DRAGONFORCE album. Guitarist Sam Totman said: "We worked really closely with Coen on this new album. We are so happy with what he has brought into this new album. Every fan will be so happy to hear his majestic playing." 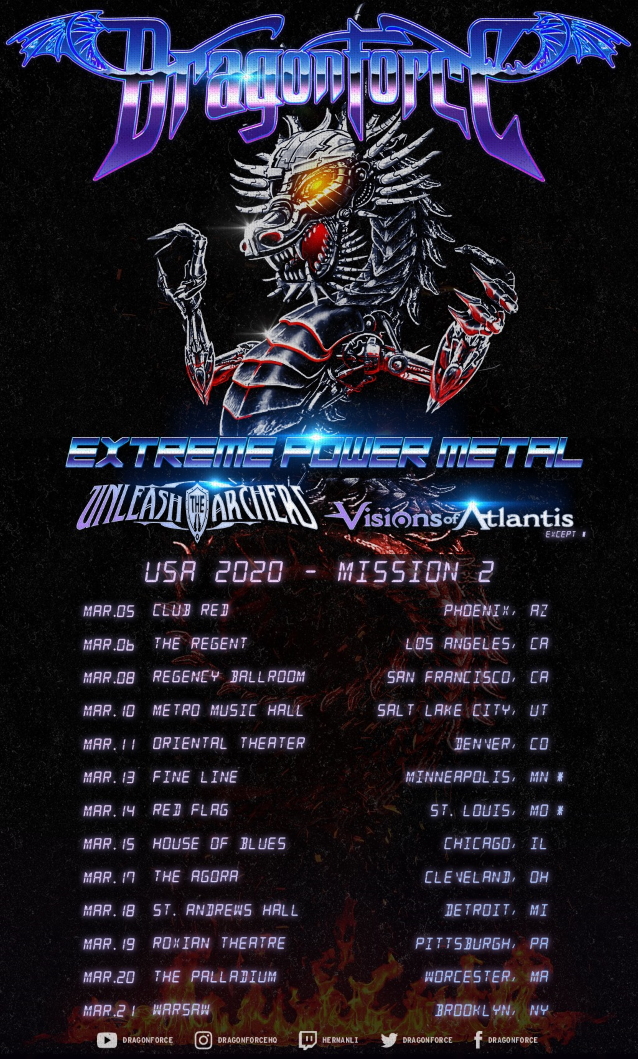