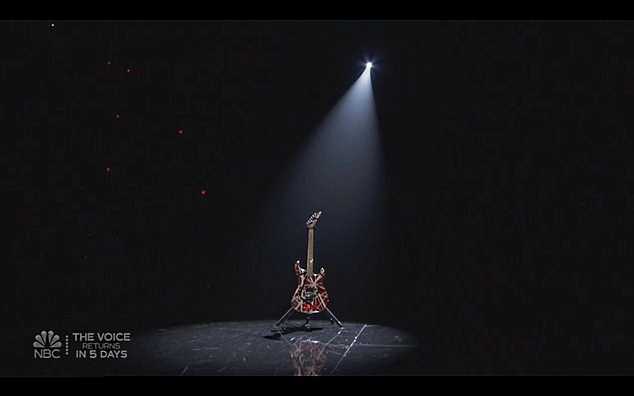 Eddie Van Halen was among the music icons who were honored at the 2020 Billboard Music Awards in Los Angeles last night (October 14). The show played a clip of VAN HALEN performing the smash hit "Panama" at the 2015 Billboard Music Awards, followed by a single shot of a a lone Frankenstrat guitar on stage in a spotlight.

Pop singer Kelly Clarkson, who hosted the program, paid tribute to Eddie at the ceremony, saying (see video below): "Just a few days ago, a true giant was taken from us: Eddie Van Halen. He was a legendary guitarist, an amazing musician and an incredible songwriter." After the performance of "Panama", she added: "That moment is one that all who saw will always remember."

Billboard Music Awards was held at the Dolby Theatre in Hollywood without an audience in attendance. The show was rescheduled from its original date of April 29 due to the pandemic.

VAN HALEN's appearance at the 2015 Billboard Music Awards — which aired live from the MGM Grand Garden Arena in Las Vegas via ABC — marked the first time that the most recent lineup of the band (including David Lee Roth on vocals and Eddie Van Halen's son Wolfgang on bass) had performed at an awards show.

The rock act was introduced by pop superstar Taylor Swift, a move which got mixed reviews on social media.

Eddie died on October 6 at St. John's Hospital in Santa Monica, California. His wife, Janie, was by his side, along with Wolfgang, and Alex, Eddie's brother and VAN HALEN drummer.

Eddie and Alex formed VAN HALEN in 1972 in Pasadena, California, with Roth on lead vocals and Michael Anthony on bass.

A true giant was taken from us... Eddie Van Halen. He was a legendary guitarist, an amazing musician, and an incredible songwriter. He will never be forgotten. ❤️ #BBMAs