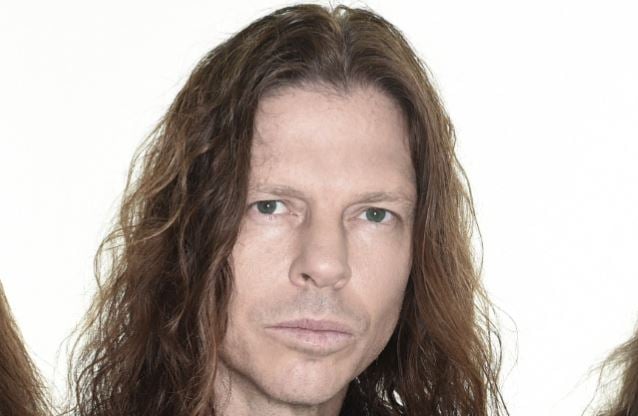 Former MEGADETH and current ACT OF DEFIANCE guitarist Chris Broderick was interviewed on the April 22 edition of the "Music Mania" podcast. You can now listen to the chat in the YouTube clip below. A couple of excerpts follow (transcribed by BLABBERMOUTH.NET).

On getting the phone call asking him to join MEGADETH:

Chris: "For me, it was definitely, you know, something I couldn't believe that was happening. At first, actually, when I put down the phone, I almost thought it was somebody playing a prank on me, but I quickly realized that that wasn't the case. So I got to work, you know?"

On the songwriting process in MEGADETH:

Chris: "Well, the writing process was one where… Dave [Mustaine] is MEGADETH and he very much has the reins on the writing. But he would always ask for our input and get our opinions on things, so we would definitely try and contribute as much as possible. But at the end of the day, you want it to sound like MEGADETH, and you're going to the source, [which] is Dave Mustaine."

On the defining moments in his career:

Chris: "Well, there are different aspects of that. I would definitely say that the very first 'Big Four' [show] was when I was on stage. Just the overwhelming reality of where I was at, I couldn't believe, you know. It was so awesome to play to that many people. And you could feel the energy in the air, there were so many people there. It was great. And then METALLICA, they were generous with not only their time and letting us jam with them up on stage, but also… They were, like, 'If you need to use our rehearsal room, just let us know.' They really opened up the gate and made you feel like it was a thrash community as opposed to just a large bill. And then, for me, it's not all about what you do on stage. I think one of my most defining moments was when a kid had come up to me and told me that he was using one of my compositions — this piece called 'Downward Fall' — for his audition material to get into Berklee College Of Music. So that, to me, is a really definining moment as well — that you can have that kind of an impact on people."

Broderick joined MEGADETH in late 2007 as the replacement for Glen Drover, who left the group in order to focus on family life.

Chris has been playing guitar since he was eleven years old and had been teaching for 15 years prior to joining MEGADETH. Styles range from classical, rock, blues, and jazz. He started taking lessons at 14 years of age studying guitar as well as voice, violin, and piano. Chris has a degree in classical guitar music performance at the University Of Denver and the Lamont School Of Music. He has performed in many master classes including ones given by David Russell, Benjamin Verdery, and his primary instructor, Ricardo Iznaola. In addition, Chris has taken classes such as jazz improvisation, chord voicing, advanced music theory, and sight-reading.

ACT OF DEFIANCE's debut album, "Birth And The Burial", was released on August 21, 2015 via Metal Blade Records.