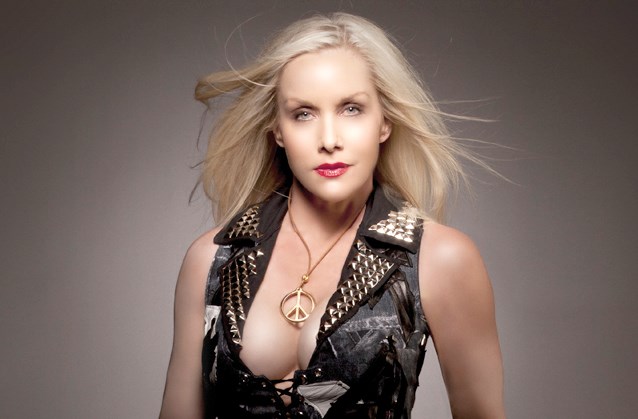 Former THE RUNAWAYS singer Cherie Currie was interviewed on "Totally Driven Radio", the weekly radio podcast heard live every Thursday night from 8 p.m. until 11 p.m. EST on the Totally Driven Entertainment Radio Network. You can listen to the podcast below. (Note: The Currie interview begins around the 61-minute mark.)

Currie spoke to the SF Examiner about the current status of the solo album she made in 2011 — produced by former GUNS N' ROSES drummer Matt Sorum and and featuring guest appearances by fellow ex-GN'R members Slash and Duff McKagan, THE VERONICAS and Juliette Lewis. It also includes a duet with SMASHING PUMPKINS mainman Billy Corgan and a remake of the old RUNAWAYS classic "Queens Of Noise" with DISTILLERS and SPINNERETTE singer Brody Dalle.

After it took over a year for everyone involved to sign off on the CD, Currie, 53, was prevented from touring by her then-manager Kenny Laguna, who also represents Currie's former THE RUNAWAYS bandmate Joan Jett.

"He said, 'Nope, you can't play, it's not time,'" said Currie. "One summer went by, and then another, and another was coming up, and I said, 'Kenny, you can't let me sit here. The band's been waiting for two years!' I was trying to tell him that I'm not 20 years old anymore — one year is like five when you hit 50."

Currie has since ended her working relationship with Laguna, and as a result, "we're not even sure if the record is going to see the light of day," said her son, Jake Hays, who plays guitar in her band and whom she had with actor Robert Hays.

"Because the business didn't work for me when I was young, it's become a dream of mine to come back," she said. "But I can't wait for anybody anymore. I just want to play some RUNAWAYS songs for all the fans and kind of say goodbye, in a way."

In a recent Facebook post, Currie said about her plans for the immediate future: "I'm going to play, play, play, like I wanted to from the beginning. I'm going to give the fans what they want and deserve without management and without a record company.

"[Fellow ex-THE RUNAWAYS member] Lita Ford said to me the other day, 'Sister, you're not dead yet!' And she's right. It's time to put faith in the only things I can count on. Myself and the fans. That's really all that matters."