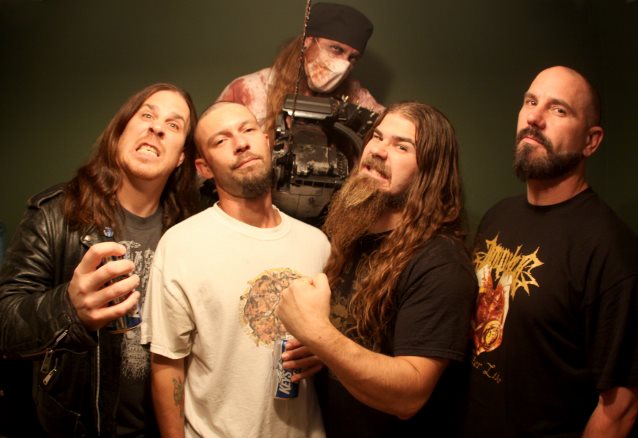 Said EXHUMED's founding guitarist/vocalist Matt Harvey: "We entered the studio April 1st with our buddy Jarrett Pritchard (GRUESOME, GOATWHORE) to start the process, and no, this is not an elaborate April Fool's joke...

"'All Guts, No Glory' was more of a straight-up speeding attack, 'Necrocracy' had a bit more focus on groove and incorporating some mid-paced stuff in there, and this one is gonna be a lot darker. It's a concept album, which is a first for us, so expect some new twists on our tried-and-true formula: one part late '80s death metal, half a cup of German/Canadian/Bay Area thrash, a dash of grindcore, crossover, and crust, and the occasional, well-concealed, HALL & OATES rip-off."

In related news, EXHUMED has confirmed a string of European tour dates this June which include a performance at Hellfest and follow their North American appearances at Modified Ghost Festival II in Vancouver and the Maryland Deathfest in Baltimore in May.