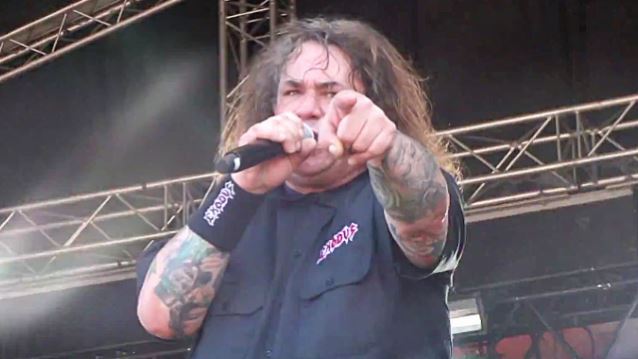 Fan-filmed video footage of EXODUS's June 6 performance at the FortaRock festival at Goffertpark in Nijmegen, The Netherlands can be seen below.

Guitarist Gary Holt was unable to join his EXODUS bandmates for the FortaRock appearance due to his commitments with SLAYER. Replacing him at the event was HEATHEN's Kragen Lum.

EXODUS's latest album, "Blood In Blood Out", sold around 8,800 copies in the United States in its first week of release to debut at position No. 38 on The Billboard 200 chart. Released in North America on October 14, 2014 via Nuclear Blast, the CD art was illustrated by Swedish artist Pär Olofsson, known worldwide for his incredible renderings that have graced the covers of countless heavy metal albums, including EXODUS' "Let There Be Blood".

"Blood In Blood Out" is EXODUS' first album since the departure of the band's lead singer of nine years, Rob Dukes, and the return of his predecessor, Steve "Zetro" Souza, who previously fronted EXODUS from 1986 to 1993 and from 2002 to 2004.