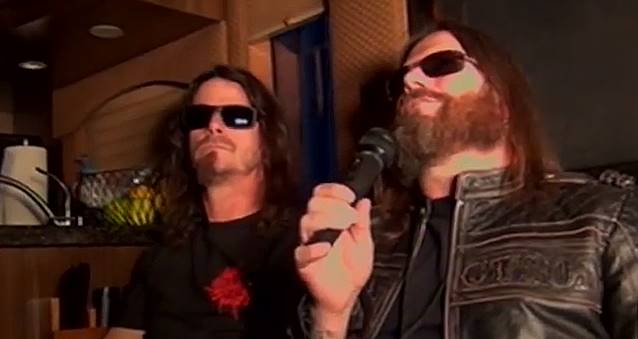 Bay Area Backstage conducted an interview with SLAYER touring members Gary Holt (guitar, also of EXODUS) and Paul Bostaph (drums) before the band's October 30 concert in San Joese, California. You can now watch the chat below.

Asked about the progress of the songwriting sessions for the next EXODUS album, Holt said: "This [SLAYER] tour runs 'till… I get home December 1, and I've been writing for the last several months. Actually, I go home tomorrow for one day, then fly to Seattle. So when I resume this tour, I'm bringing my recording gear with me and continuing to work in hotel rooms. We're tentatively slated to start recording the next EXODUS February 1, and it's crushing — it's ridiculously fast and heavy. It's been a long time coming, so people, they're hungry and they're tired of waiting. So it's gonna be a pleasant surprise."

EXODUS recently completed a European tour of 17 cities, with stops in Barcelona, Dublin, London and more. Although SLAYER tapped the talents of guitarist Gary Holt for their European tour, Holt performed at select EXODUS dates. When Holt was not performing with EXODUS, HEATHEN guitarist Kragen Lum was filling in on guitar.

EXODUS' latest album, "Exhibit B: The Human Condition", was released in North America on May 18, 2010 via Nuclear Blast Records.

The CD sold around 4,600 copies in the United States in its first week of release to debut at position No. 114 on The Billboard 200 chart.

EXODUS' previous album, "The Atrocity Exhibition: Exhibit A", opened with 3,600 units back in October 2007.