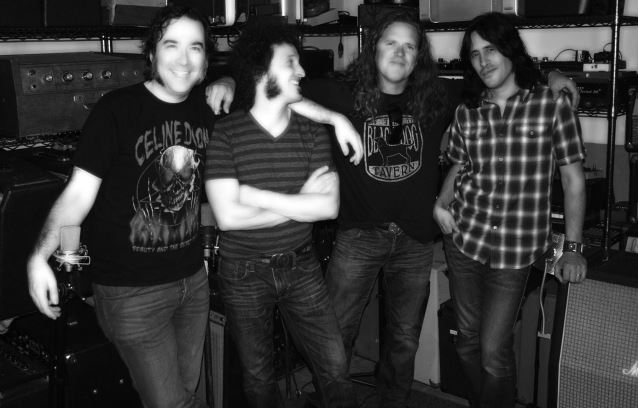 "Whatever Happened 2 Us", the new solo single from bassist Pat Badger of reactivated Massachusetts hard rockers EXTREME, can be streamed using the SoundCloud widget below.

Pat has been collaborating with his "good buddy" Bleu McAuley for over six months on material that will appear on Badger's upcoming debut "solo" album.

said Pat: "[Blue] is one of my favorite artists, songwriters and he is also producing the album."

He added: "Some of you may also know Joe Pessia (HURTSMILE, TANTRIC, DRAMAGODS) who is playing guitars along with Bleu on the album.

"Kevin Figueiredo, my favorite drummer in the universe (and the other half of EXTREME's rhythm section) is also playing on this record.

"Things are really coming together and I've never been so excited about making an album in my life!!!

"It's been a while since the last EXTREME album and tour and as much as I love being around family, animals and the peaceful farm life when I'm home… I have really missed being in the studio creating new music.

"And, of course, taking on the role of lead singer, I'm really spreading my wings on this one!

"I have also had a few rough years on a personal note and it has really inspired me to write some lyrics and let it all out. Not all of the songs are autobiographical, but I'm ready to get on the microphone and purge! (And the studio is cheaper by the hour than a therapist.)

"With the music biz having changed so drastically since EXTREME's heyday, I knew that this album was going to be different. That's why I decided to team up with Pledge Music and bring you all in on the experience of making it and putting it out! I've always REALLY appreciated YOU (our fans) and promise that this is gonna be a blast… and a ride that we'll never forget!"

In 2008, following a 13-year hiatus, EXTREME returned to the stage for its "Take Us Alive" world tour, which encompassed 75 cities and multiple continents in support of the band's latest record, "Saudades de Rock".

This brilliant performance was recorded on the last night of their tour at the House of Blues on August 8, 2009 in EXTREME's hometown of Boston.