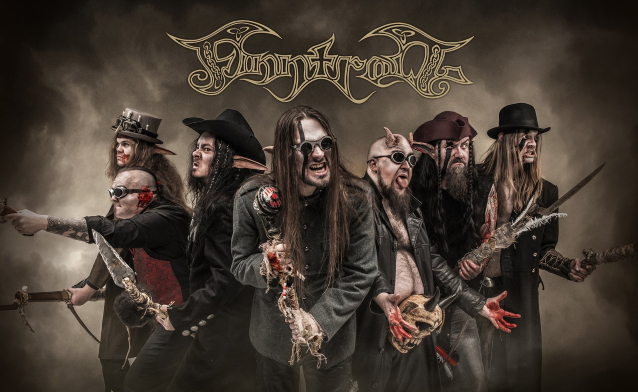 Finnish trolls of Nordic folklore FINNTROLL will release their long-awaited seventh album on August 14, 2020 via Century Media Records. The as-yet-untitled follow-up to 2013's "Blodsvept" will be celebrated with an official album-release show at the Summer Breeze festival in Dinkelsbühl, Germany.

A couple of months ago, FINNTROLL frontman Mathias "Vreth" Lillmåns told HRH Mag about the progress of the songwriting sessions for the band's next disc: "We're working right now. We're in the writing process and we are sharing ideas in our suggestion box — shared drive we put things in. There are about 25 songs in there, but they're not ready. We're feeling the pressure 'cause it's six years since we did the album."

Asked who decides what's good and what's not, Lillmåns said: "Tundra, the bass player, and Trollhorn, the keyboard player. They're usually the guys that after everybody has their ideas, filter what we'll do and compile the songs. It'll be more a Tundra show this time, 'cause Trollhorn has a family. Tundra has more time and will more than likely be the producer of the next album."

Regarding how FINNTROLL's composing process has evolved since the early days, Lillmåns said: "In the beginning, it was getting together and [we] made songs with no rehearsal. When it turned into a band, we rehearsed more. It varies, depending on the album. Anything can happen — it's always been like that."