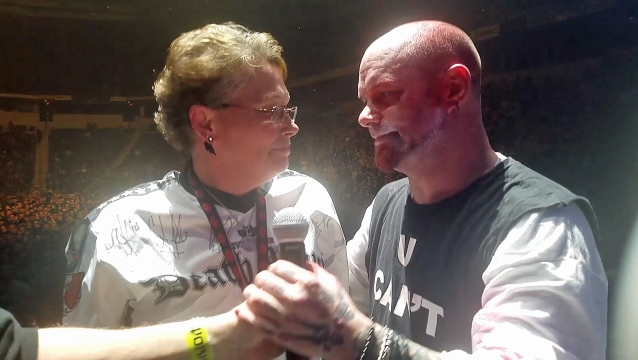 William James Plasencia, who tragically lost his life in June while home on leave from serving his country as an active duty member of the United States Army, was honored by FIVE FINGER DEATH PUNCH Saturday night (December 1) at Verizon Arena in Little Rock, Arkansas. Singer Ivan Moody introduced The Edge 's Jeff Cage and Matt Cruz, who brought on William's mother, Skyla Sunrise, to have "Gone Away" dedicated to her son and to remember all of our veterans and servicemen and women who guard our country and protect our interests anywhere in the world.

In addition to getting behind law enforcement, FIVE FINGER DEATH PUNCH has supported programs for returning soldiers, gone overseas to play for U.S. troops and made it a point to hire veterans for its tour and security teams.

Guitarist Zoltan Bathory told Yahoo! that for him and his bandmates, concern for our troops and veterans is part of everyday life.

"Basically, with the band from the very beginning — I'm talking about before we even had a record deal — it just so happened that a lot of our fans were military guys. We've always have had songs that have had military themes. It's just something that's close to us. It's a special kind of person who signs up and does what these guys do, and we have a fight-for-yourself and stand-up-for-yourself attitude, because none of us was born with a silver spoon in our mouths. We have to fight for everything we have, so our lyrics our similar to their mindset. They can't run away. They have to do their job, so we're kindred spirits, so to speak."

With that sort of connection, it was only natural for the band to begin playing gigs for the troops at military bases around the world, including Iraq.

"When we were over in Iraq playing our USO tour, I had one soldier come up to me, and he laid a burnt iPod down on the table," Moody told Stereogum in a 2015 interview. "He didn't ask me to sign it. He wanted me to keep it. I looked at him a bit funny at first. He told me one of his closest friends went out on a mission and didn't make it back. Let's leave it at that. When they found him and his things, his iPod was stuck on 'The Bleeding'. The last thing he was listening to before he went was one of our songs. I literally teared up."

FIVE FINGER DEATH PUNCH is continuing to tour in support of its latest album, "And Justice For None", which came out in May.

US Army Specialist WIlliam J. Plasencia was honored by Five Finger Death Punch Saturday night at Verizon Arena. Singer Ivan Moody introduced The Edge's Jeff Cage and Matt Cruz who brought on his mother, Skyla Sunrise, to have "Gone Away" dedicated to her son and to remember all of our Veterans and service men and women serving our country. Here is the ON STAGE footage.