Founded in 1991, EZ LIVIN' sold 20,000 copies of its debut album, "After The Fire", in Europe alone. A tour part of the Metal Hammer Roadshow with AXEL RUDI PELL, CASANOVA, CORACKO and DOMAIN followed.

Now, in the year 2013, Hans Ziller has called on some new colleagues to get the group going again. The guitarist added some familiar names to the lineup: BONFIRE drummer Harry Reischmann, MOTHER ROAD and ex-SOUL DOCTOR guitarist Chris Lyne, TANGO DOWN and SEVEN WITCHES bassist Ronnie Parks, ex-RAINBOW keyboardist Paul Morris and the aforementioned Reece.

EZ LIVIN''s new album, "Firestorm", will be released on February 28, 2014. The CD was produced and mixed by Alessandro Del Vecchio (HARDLINE) and features the band's unique brnad of melodic hard rock with a bluesy touch.

EZ LIVIN' is ready to rock the European stages again in April 2014. The band will perform both old and new songs from its own catalogue, but also offer the classic songs from BONFIRE, ACCEPT, RAINBOW and SOUL DOCTOR. 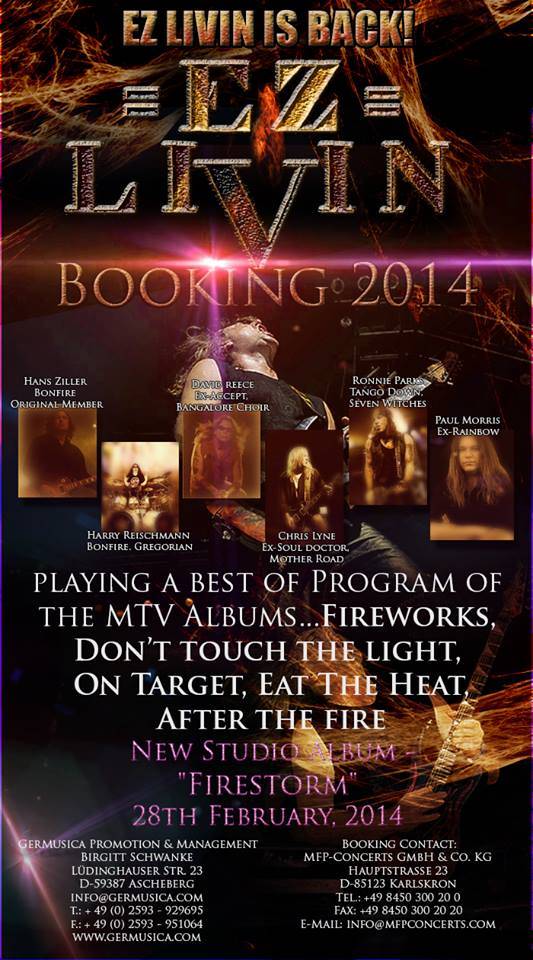