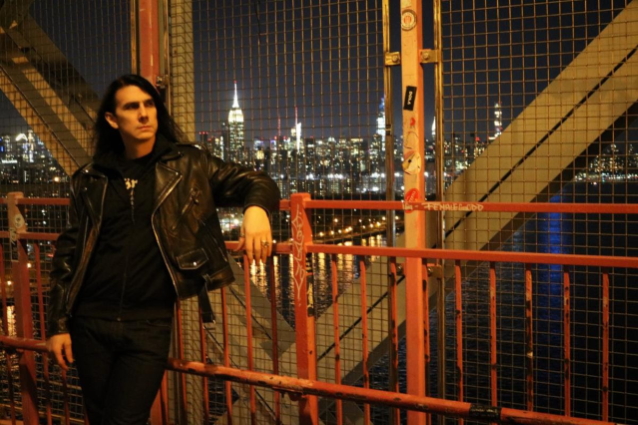 Fans who are accustomed to a big rock production sound from Mayhew's guitar sound and production will find that "Chaos Magic" is more streamlined and raw. The track was recorded live in one afternoon with little or no punches and feels alive and human, without today's modern digital stiffness, just a balls-out rocker.

"I believe that a song should be a journey; there should be a clear introduction to set up the listener for the ride, and a ceremonious feeling of arrival at a destination to be experienced and a few musical surprises along the way," Mayhew says. "And, of course, all great songs should have a feeling that the journey is complete, the catharsis, a lesson I learned from both MOTÖRHEAD and RUSH. MOTÖRHEAD, particularly, in that within their deceptively simple approach there always comes a thoughtful, surprising and very musical ending, songs should have great endings."

The video for "Chaos Magic", directed by Mayhew, can be seen below.

"I have been cultivating the idea for the 'Chaos Magic' video for a very long time and planned it in increments, saving up ideas for when it was time to make it," Mayhew explains. "I've been riding my bike over the Williamsburg Bridge all my life. It is unchanged from the first time I went up there, a perpetual NYC experience, above the skyline. It's a front row seat to the sprawling cityscape of Manhattan for the outer borough resident or a startling look back for the Manhattan resident who forgets the wonder of where they live, but the bridge is more than a vantage point for the view, it is a place of awe in its own right, and an enduring piece of the NYC of my youth."

Every time Mayhew road across the bridge, he would envision how he could shoot a video there someday, planning shots, angles and mentally collecting the puzzle pieces to complete the picture in his head and the representation of his music.

Mayhew used the COVID-19 NYC lockdown and empty streets of Manhattan to his advantage, making nightly excursions to film anywhere from two to six hours a night. He shot close ups one night, guitar shots another and bike shots another. With clear ideas in his head, he knew exactly how he would make the video. But doing it with a crew of one became challenging and exhausting so Mayhew took his time.

"I'd love to say something mythical like 'The video was shot over one long summer night somewhere between Brooklyn and Manhattan under a full moon with a crew of 50 film professionals who came together to make the video a big Hollywood production,'" says Mayhew. "But it was an altogether different experience." He shot at night and didn't see people for hours, and often shooting until sunrise. The bridge was his, he would trek up the bridge night after night for 22 nights with a camera, tripod, lights, three guitars, stands, sandbags and wardrobe changes. Mayhew would set up the shots with his lone assistant — a young electrician named Scott, whom Mayhew had mentored into the film business — holding a guitar while Mayhew lit him, then two would change places, essentially making the video an elaborate selfie.

The video is peppered with nods and impressions to tell people who Mayhew is as a person and artist. He played roles, versions of himself, at different stages of his life over the years. He plays his trademark red B.C. Rich Bich guitar, wearing a leather jacket, high top Adidas sneakers, with tied his hair up and shoved it in a baseball cap to look like he did when he started the CRO-MAGS leading up "The Age Of Quarrel" era. Another character is with his hair out, playing the White G&L guitar, like his "Best Wishes" or "Revenge" stage in life. Then there is Mayhew of the present, on his bike, continuing to ride across the bridge, watching the video he envisioned unfold just as he saw it in his head as he rides past himself, but now he's also in the video.

AGGROS will release music in a true DIY hardcore style — no label, self-releasing one song at a time, accompanied by a video for each. The music will sound and feel familiar to anyone who knows Mayhew's previous three albums, as AGGROS is simply a continuation of his musical exploration.

"So much of what I've bottled up for years comes out in this song and video," the guitarist says. "For me, the song and video are inseparable. This video serves as a signal flare. It feels like my first record. The fire to make it was unconscious and natural and it wasn't on a timetable or for any other reason than that it was time."