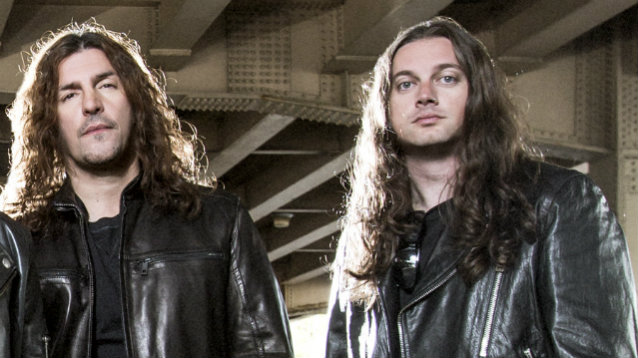 Mike DiQuinzio of JAM Magazine conducted an interview with ANTHRAX bassist Frank Bello prior to the band's April 18 show at the House Of Blues in Dallas, Texas as part of "The Killthrax Tour" with co-headliners KILLSWITCH ENGAGE. You can watch the full chat below. A few excerpts follow (transcribed by BLABBERMOUTH.NET).

On the status of drummer Charlie Benante, who has been forced to sit out some recent shows due to his ongoing issues with carpal tunnel syndrome:

Frank: "That carpal tunnel, you guys know this at this point, it's been well documented. He had surgery on his hand for the carpal tunnel, on his wrist. He can only play a certain amount of time per tour, so there's certain shows he can make. I've seen it. It goes dead. He loses the grip and that's not an excuse…it is what it is. So Jon Dette [SLAYER, TESTAMENT] comes in when he needs a break and he comes back in when he can. We have to play as we can. We don't want to cancel tours, that's for sure."

On whether ANTHRAX is converting younger fans who are there to see KILLSWITCH ENGAGE:

Frank: "That's the whole point. I'm proud to say this: We've just about played in front of every crowd. We don't really worry about any crowd we play in front of. We just want to give our all and hopefully they like us at the end of the day. That's all you can do as a musician and band member. Just give it your all and let them know that you're leaving it all on the stage. Hopefully, they'll come back. Look, since this 'Big Four' thing we did way back when, it's been awesome for us. METALLICA were great enough to bring us all out. From that, I think a lot of younger fans also saw ANTHRAX that maybe heard of ANTHRAX, but never really saw them and they got to see them on the 'Big Four,' so we've been seeing — even at our own shows before this thing — a lot of younger people along with our crowd, too. It just so happens there's a bigger crowd showing up now. It's a great mix of younger and older; it doesn't matter. You see that in our crowd, which is really fun to watch. There's an energy you can't describe because it's a lot of fun to watch. With this, I love the fact if there's a KILLSWITCH person who has never seen ANTHRAX and gets to see them and maybe we give them a chance to buy a record or song off of iTunes, then we've done our job. That's the whole idea behind this. It's the same thing for KILLSWITCH. Maybe some ANTHRAX fans have never heard of KILLSWITCH, maybe heard of them and not given them a chance. Open your ears. I love opening my ears to different music; I think it's important. That's what this tour is about. I think it's cool."

On lead guitarist Jon Donais, who joined ANTHRAX in 2013:

Frank: "I can say this right off the bat: The best thing I can say about Jon, number one, is that we know how great of a guitar player he is, but he's my drinking buddy. [Laughs] Jon is a great addition to ANTHRAX because it's seamless. You have to hang and stuff like that… it's like he's always been here. It's very strange. We've been friends, but it's a lock. You don't have to think about anything. It's just fun and we have a good time."

On Donais gradually becoming more comfortable with his role in the band:

Frank: "I said, 'Man, imagine coming into this band who has been around forever. Thirty years coming into this band and he's seen them as a fan and all of this stuff and he has to play the leads.' Everybody is expecting those leads on the songs they've heard. It's a lot of pressure. He kills it. He kills it every night. He better pay me for this — he owes me a beer. I think, it's seamless. Now he's really comfortable on the stage. We all have our thing. He's a great addition to the show, too. It's a really good thing that's going on with the nucleus of ANTHRAX right now."

On whether ANTHRAX has ever abandoned a cover song idea:

Frank: "Believe it or not, you got to realize, when we do covers in the studio, it's literally Scott [Ian, guitar], Charlie and myself going 'Let's just jam.' It's like that: 'Let's record it.' We record it and then Joey [Belladonna, vocals] will do vocals later on. Sometimes we have time to do the vocals and we were going on tour and that stuff, but there's things left we still haven't finished that later on [we finish]. Think about all the stuff we've ever done is all the stuff we're fans of, that made us: KISS, all the CHEAP TRICK, all that great stuff, like this KANSAS thing ['Carry On'], all these radio stations, knock wood, are playing this song because they think it's a great cover. Stations that would have never gave ANTHRAX, the metal stuff, a chance, heard this cover and they're really liking it to the point where we're playing acoustic stuff and learning it acoustically where we might have to do it on radio stations, which is great. It's another extension and it's a tribute, tip your hat, thank you, to these bands, these great bands we want people to hear. Everybody has heard 'Carry On', but maybe the younger generation hasn't heard [it]."