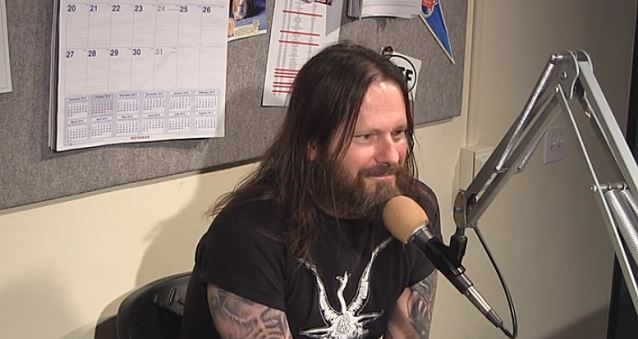 EXODUS mainman and current SLAYER touring guitarist Gary Holt was recently interviewed by "Metal Zone" host Nikki Blakk of the San Francisco, California radio station 107.7 The Bone. You can now watch the chat below. A couple of excerpts follow.

On plans for a new EXODUS studio album:

Holt: "After this upcoming October/November SLAYER tour, I'm off from that band until next April. So I have this window of opportunity [to work on a new EXODUS CD]. So we're gonna make the album, we're gonna make it happen, whether it kills me or not. We're looking at February to start [recording].

On how the songwriting process for the next EXODUS album is going:

Holt: "I'm heavily in riff mode [right now]. It's always hard to gauge where a record's going right away, but you kind of get a feel for where you're headed mentally, and right now it's really fast. It's ridiculous."

On whether there he has anything SLAYER-related scheduled beyond this fall North American tour:

Holt: "[There is] nothing that I know of at all. I just know that I have a nice, big gap to do the EXODUS thing and get the [new] album done. So myself and the whole [EXODUS] band, we're dedicated and committed to making it happen, because [the SLAYER] train may start rolling again, and then I don't have that several-month break to make it happen.

"I wanna make sure that the [next EXODUS] album is as good as it needs to be, and knowing I am going to be on a tight time frame, it does tend to stress me out quite a bit. But I think I write well under stress… I hate the pressure. But I do what I gotta do. We all do. So we'll make it happen."

On trying to plan EXODUS' future while touring heavily with SLAYER:

Holt: "At times, you feel like you're being pulled in two different, playing with two awesome, legendary bands. But long-terms plans [for EXODUS] are just to keep making records, keep striving to make a better one than the last. [Make it] heavier — always heavier."

EXODUS recently completed a European tour of 17 cities, with stops in Barcelona, Dublin, London and more. Although SLAYER tapped the talents of guitarist Gary Holt for their European tour, Holt performed at select EXODUS dates. When Holt was not performing with EXODUS, HEATHEN guitarist Kragen Lum was filling in on guitar.

EXODUS' latest album, "Exhibit B: The Human Condition", was released in North America on May 18, 2010 via Nuclear Blast Records.

The CD sold around 4,600 copies in the United States in its first week of release to debut at position No. 114 on The Billboard 200 chart.

EXODUS' previous album, "The Atrocity Exhibition: Exhibit A", opened with 3,600 units back in October 2007.