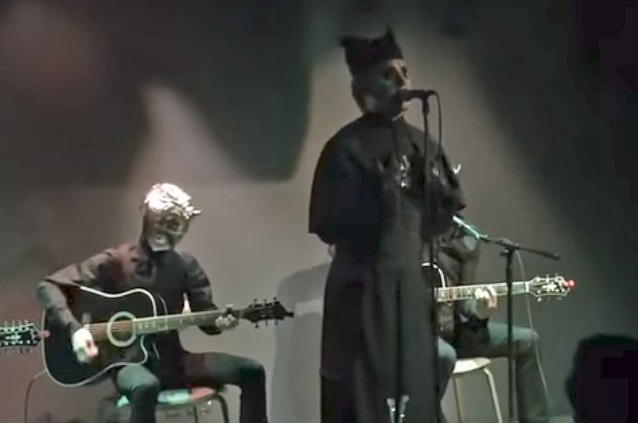 GHOST played a short acoustic set at a private event in Chicago Friday night (April 6) premiering the band's upcoming album. The three-song performance included the debut airing of the disc's first single, "Rats", which opens the album and is expected to be made available later this month. It was also the first time GHOST performed with its new frontman, who is named Cardinal Copia and apparently isn't a part of the Papa Emeritus bloodline.

A brief video clip of the "Cirice"performance from last night's event can be seen below.

The last Papa, Papa Emeritus III, was forcibly taken from the stage during the final show of the band's "Meliora" tour cycle last fall, with Papa Zero arriving to announce the beginning of "the Middle Ages." Of course, all the Papas — except the elder Zero — and Cardinal Copia are the same man, GHOST founder and vocalist Tobias Forge.

Forge's new alter ego will make his official live debut on May 5 as the Swedish band kicks off a run of North American dates in Riverside, California.

The "Rats On The Road" trek, as it's called, will be in support of the group's fourth studio LP, which is tentatively due in June via Loma Vista Recordings. The disc was recorded last year at Artery studios in Stockholm with producer Tom Dalgety (OPETH, ROYAL BLOOD) and was mixed in January at Westlake Studios in West Hollywood, California with Andy Wallace (NIRVANA, SLAYER). Other songtitles set to appear on the LP include "Life Eternal", "Faith" and "Dance Macabre".

Forge told Revolver about the upcoming album: "It is loosely themed around the concept of death and doom. It's a themed album around medieval times, but it's definitely clinging onto a lot of very current things. The Black Death [plague] is a great example of a turning point for a whole civilization. Complete villages were annihilated. Most people knew very little, so all of it was God or the Devil — and about their faith being questioned: Why are we being stricken down by this great scourge? It must be because of our not fearing God enough and all this superstitious bullshit.