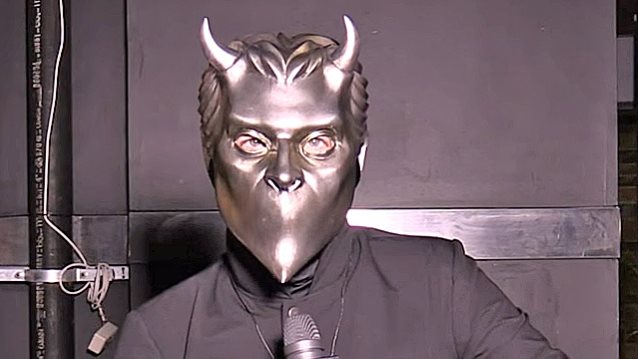 Swedish occult rockers GHOST are among the nominees for the 58th annual Grammy Awards, which will be held on February 15 at Staples Center in Los Angeles and broadcast on CBS at 8 p.m. ET. GHOST is nominated for the song "Cirice", from the band's third album, "Meliora".

Speaking about the nomination, one of GHOST's nameless ghouls told Grammy.com (see video below): "Being nominated for a Grammy is obviously a big honor for any band or artist — obviously, ourselves included. Especially for us, as a Swedish band, it feels extra honoring, I guess. Especially us maneuvering in the rock genre, where traditionally it's usually British or American bands.

"To my knowledge, we are the first Swedish rock band to ever be nominated for a Grammy, which is also the reason why when we got the news that we were nominated, I just got a text saying, 'You're nominated for a Grammy.' In Sweden, we have another prize called Grammis, which, internationally, is referred to as the Swedish Grammy. So when I got the text, I told my friend next to me that we were nominated for a Grammis. So it took like an hour later until I actually got it confirmed that they were actually talking about a Grammy, not a Grammis, which was a very mind-boggling experience. So winning or not winning, just being nominated is a big honor, and for us it's definitely a sign of recognition that we can suck on for the rest of our lives."