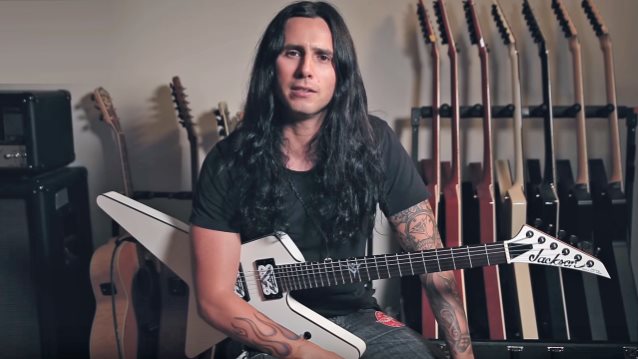 Greek guitar virtuoso Gus G., well known in rock and metal circles for his work as Ozzy Osbourne's guitarist and as leader of his own band FIREWIND, spoke to Metal Wani about the possibility of a new solo album from the BLACK SABBATH singer once the legendary heavy metal band has completed its "The End" tour in early 2017.

Asked if he will be part of Ozzy's next solo record, Gus — who joined Osbourne's band in 2009 and appeared on his eleventh studio album, "Scream" — said (hear audio below): "I should hope so. I haven't heard any news regarding when we're going to be doing this, because I think he's still on tour with SABBATH. And I know he's been hinting a little bit to the press that he wants to do another solo record, but who knows when that will be? I think that's more of a question for him instead of me."

Pressed on whether he will have time to work on Ozzy's next solo album in between his touring commitments with FIREWIND and as a solo artist in the first few months of 2017, Gus said: "Hey, man, if the Ozzman calls, you have to make time. You have to be stupid not to make time for him."

Ozzy recently told SiriusXM that he has no intention of retiring once SABBATH has completed its farewell tour. He said: "I've been writing with Billy Morrison [who currently plays guitar in Billy Idol's band and co-wrote songs on Idol's latest album] and [Idol] guitarist] Steve Stevens. [Steve is] not gonna be in my band, he's with Billy Idol. But he's a friend of [Morrison's] and [Morrison] plays with Billy Idol. I said, 'I've got some ideas,' and we worked it out. There's one song that right now is called 'Crack Cocaine'. It's like a bluesy thing."

Asked when fans can expect to see his next solo album, Ozzy replied: "I don't wanna say when [it will be out]. I can't be working the SABBATH thing and my own thing at the same time. I tried that with the Ozzfest; it didn't work."

Ozzy told Metro back in August that he was "playing around with some song ideas" for his next solo album. He added: "Once BLACK SABBATH is off the road, I will be heading into the studio with my band to get the songs recorded. Once it's all in the can, you can be sure to see me back on the road again."

Ozzy's wife and manager Sharon Osbourne told Rolling Stone that the 68-year-old singer will carry on as a solo artist after BLACK SABBATH's farewell tour comes to an end. "We'll continue until Ozzy finishes, and Ozzy won't be long behind them when he calls it a day," she said.

Ozzy has not released an all-new solo album since "Scream", having spent the last few years touring with BLACK SABBATH and recording that band's "13" album.