Atlantic recording group HALESTORM has announced details for a second leg of its North American tour showcasing all female-fronted hard rock outfits. HALESTORM frontwoman Lzzy Hale said: "After the announcement of our tour with IN THIS MOMENT, the response was so great that we decided to do another run together! It's going to be so much fun to tour with our good friends! See you all on the road!"

A special BLABBERMOUTH.NET presale will begin on Wednesday, April 18 at 9:45 a.m. EST and end on Thursday, April 19 at 10 p.m. local time. When prompted, type in the presale code "Freaks" to access tickets before the general public.

HALESTORM is getting into the homestretch with the recording of its new album. The band's fourth full-length disc is being recorded at Dark Horse Recording studios just outside Nashville with Nick Raskulinecz, an acclaimed producer who has previously worked with RUSH, KORN, ALICE IN CHAINS and DEFTONES, in addition to having produced HALESTORM's third covers EP, "ReAniMate 3.0: The CoVeRs eP", which came out in January 2017.

HALESTORM guitarist Joe Hottinger told the SiriusXM show "Trunk Nation" that the band's follow-up to 2015's "Into The Wild Life" will contain some of "the heaviest stuff we've ever done."

"Into The Wild Life" was criticized by some HALESTORM fans for veering too far into pop music territory. 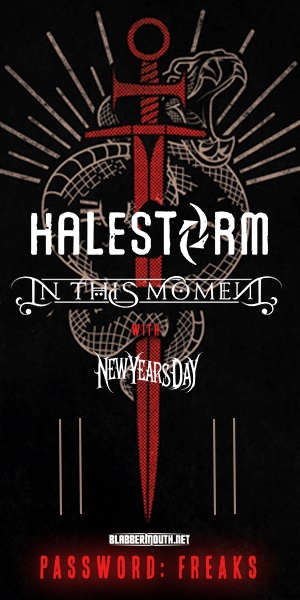