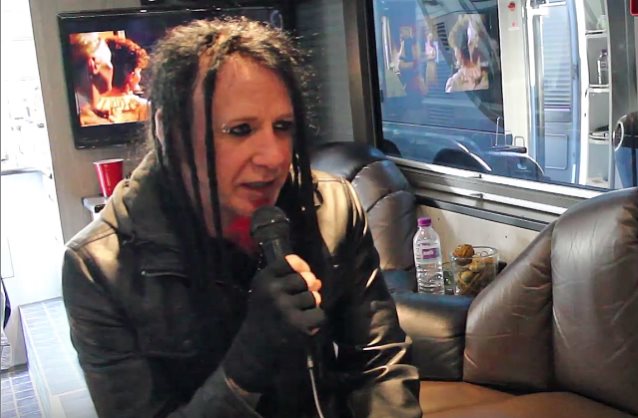 Metal-Heads.de conducted an interview with HELLYEAH singer Chad Gray before the band's March 25 concert in Düsseldorf, Germany as the support act for KORN. You can now watch the chat below.

Speaking about the lyrical message behind HELLYEAH's latest single, "Love Falls", Gray said: "It's really important to me to write kind of vague and ambigious, so people can make it… 'Cause maybe it is about a relationship or whatever, and that's how somebody makes that connection to the song. Or maybe it is about a different type of love that you've lost or whatever. But I think that everybody in this world that has any kind of human emotion or feeling has had an experience with lost love, whether it's a breakup or whether it's... I mean, think about death. You know what I mean? My God! And just the idea that… It's kind of my fucked up way in my head that good things go away. I mean, we're all products of our past [and that's what] made me who I am."

He continued: "I've lost love and I have experienced death and the loss of people that I love on pretty much every level, and it really does suck. So it's not like I'm writing something that I don't know anything about. But I wanna make it… If I write it from my heart and I write it vague enough, people can make it part of their life."

Gray added: "Building a relationship, I think it starts with vulnerability — to build a strong relationship. And that's how really strong, solid relationships grow — by people giving in and trusting and being vulnerable to another. And writing songs is very much doing that, 'cause it's something that I have experience with. I put it out there. Like the line in [the song] 'X': 'Bear my soul.' It's wide open. Are you gonna embrace it? Or are you gonna fucking stab it? And trust me, both happens. I mean, my God, that's the world now — to be negative and to rip shit apart. It's terrible."