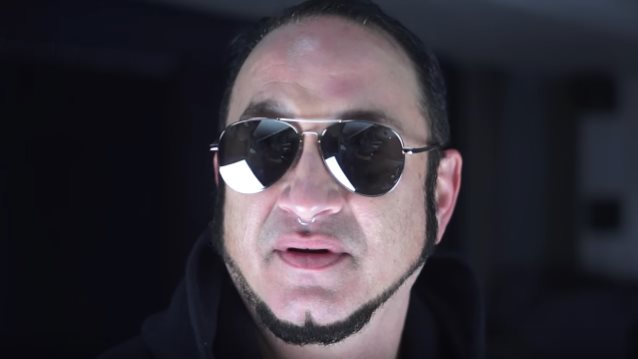 France's LoudTV.net conducted an interview with HELLYEAH guitarist Tom Maxwell during the band's recent European tour as the support act for KORN. You can watch the chat below. A few excerpts follow (transcribed by BLABBERMOUTH.NET).

On the European tour with KORN:

Tom: "It's great. We've been friends for a long time and it's been a while since we toured together, but it's great that they brought us over here to properly tour Europe and get the exposure that we really need over here. Everything is different everywhere you go, but I found that the people in Europe are very receiving and very eager and excited for us to be here, so we think we're doing some good things and we'll keep coming back."

On whether he pays attention to the band's sales figures:

Tom: "No. It's not even important anymore. I think the days where people count on record sales for success have been exhausted, especially now with streaming and downloading and subscription-based music services and stuff like that. You have to adapt. We're still on the pioneering side of things where we have to figure out the best way to get our music out there. You have to tour a lot, you have to tour constantly. You have to be smart and brand your name out there so you have other streams of income and really count on a grassroots following, that's the main thing: getting your fanbase, your grassroots fans who are always going to be there. If you rely on radio or anything like that, there's no hard-fought audience with that. When you get out there and you're touring and touring, and one-by-one [you're getting] fans, it's lifetime support. Back in the day, before our time, there was mystery there. There was no Internet; people had to buy magazines or wait to see their bands when they came in concert, that once or twice or year, if that. Nowadays, you have total access to anything you want at any time you want and because of that, people are more fickle. They want instant gratification…now, now, now. 'What's next?' It's much different."

Tom: "I'm not sure. There's probably some songs and some riffs somewhere tucked away in a vault somewhere of Dime's, but we were very fortunate enough to record a song that he and [Darrell's brother] Vinnie [Paul, HELLYEAH drummer] were a part of. It was quite a thrill to have him on one of our albums, ten years or so later."

On whether he'd change anything about the band's career so far:

Tom: "Nothing. It's perfect the way it is. I'm happier more since we did 'Blood For Blood' and this record because it's more of the type of music that I like to do. Before, I was very proud of the stuff we did, but there was other cooks in the kitchen, so to speak, and I wasn't really a big of fan of some of the more 'party rock and roll' type of stuff. I like more aggressive and more emotional and more organic and real [music], rather than… I think we were just a little out of focus back in the day. We hadn't found ourselves as songwriters and as our full band. Once we got two new members in the band, especially with Kyle [Sanders, bass] and [Christian] Brady [guitar], it really helped solidify our sound. We were able to take the music where at least we originally wanted to take it when me and Chad [Gray, vocals] first started talking about putting this band together. It took years for us to get there, but I'm more happy now than I was in the past, sure. I wouldn't change a thing from the last two albums. To me, 'Blood For Blood' really is our first record. It's the way I look at it. It's the real, first concentrated, this is the record we were supposed to do. Same with 'Unden!able'."

On what's next for HELLYEAH:

Tom: "More records, more touring. We're not going to stop. There's no point. We have a strong fanbase and we're still traveling the world. People still want us to come to different countries and play. We keep putting out strong records and good records. If the love affair were to die with writing music, then I'd probably stop. I don't want to do something I don't want to do. It's hard enough being on the road and away from your family and friends for a long period of time by itself. You need to make sure you love what you do no matter what you do. Love it and be the best at it or else it's just not worth it. If it ever got to the point where I wasn't loving it anymore, then I'd go home and get on my boat and say 'Bye bye!'"

"Unden!able" was released on June 3, 2016 via Eleven Seven Music. The effort marks the first time HELLYEAH's current lineup has recorded together as a unit.