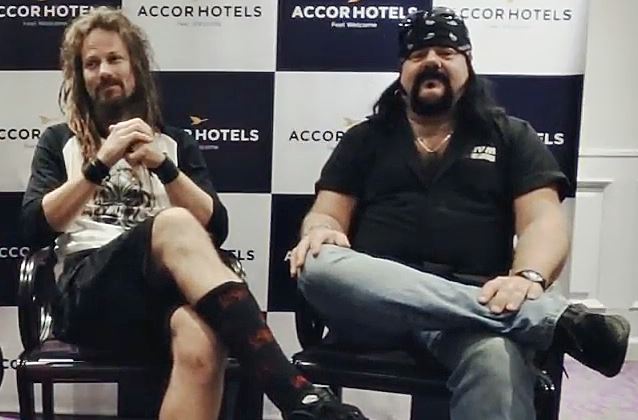 Speaking about the wide acceptance of Pro Tools recording software, with the vast majority of music being recorded digitally onto computer hard drives, Vinnie Paul said: "I would give anything if it went back to analog age. I mean, music was so real, and you had to sing everything on a record, you had to play everything on a record. There was no cut-and-paste — you couldn't get the chorus right one time and then paste it every other time; you really had to be good at what you did. And that's why some of those records, like [those by] JOURNEY and BOSTON, they're just so fucking untouchable, man. And analog is just so much wider and deeper-sounding. But that being said, you can't slow technology down, and Pro Tools has made it almost easy enough for anybody to be in a band. But you still have to write songs, and I think that's something that HELLYEAH really prides itself on — writing the best songs that we can write. I think that Chad Gray is one of the most honest, emotional, real vocalists there is; he really takes a lot of pride in writing the lyrics, takes a lot of time with them. He writes and re-writes more than just about anybody I've ever been around."

Vinnie Paul also talked about making the new HELLYEAH album, "Unden!able", in Las Vegas at The Hideout Recording Studio with producer Kevin Churko (PAPA ROACH, ROB ZOMBIE), who previously worked with HELLYEAH on 2014's "Blood For Blood". "The last two records — 'Blood For Blood' and this one — I would let Kevin Churko take the reins, and I wasn't used to that," he said. "I'd been used to being the producer or co-producer on just about everything I'd been a part of, and to have him come on board was just a dream come true, man. He's one of those people you learn to trust really fast. He's great at what he does, and he helps you paint the picture that you're looking for, and you don't have to be involved in it. When we were making those records, I could come down and really focus on playing drums for about two hours and then leave, and I could come back later that night and kind of put my producer hat on and say, 'Yeah,' this or that and the other. He's a great listener and he's open to just about anything. He's done some pretty incredible records. I mean, he worked with 'Mutt' Lange [DEF LEPPARD, AC/DC], who's one of the greatest producers ever; that's where he kind of got his start. So it was fun working with him too."

Added Sanders: "Just talking about the whole digital age, it's great and it makes things easy, but it also makes it readily available for almost anybody to do it. So then you turn the page and you get on the stage and that's where you really prove yourself. That's why a lot of bands don't tour, or they just have a hit, and they're known for that song and not for being a band. And you can also fake it on stage if you wanted to. [If you wanna] play a tape, you play a tape; to each his own. I don't really care what any other band does. But we're one band that does not do it that way; we play raw. We grew up with raw rock and roll, and that's how we are. We're not perfect; it's rock and roll. It's supposed to be flawed. It's supposed to be real and raw."