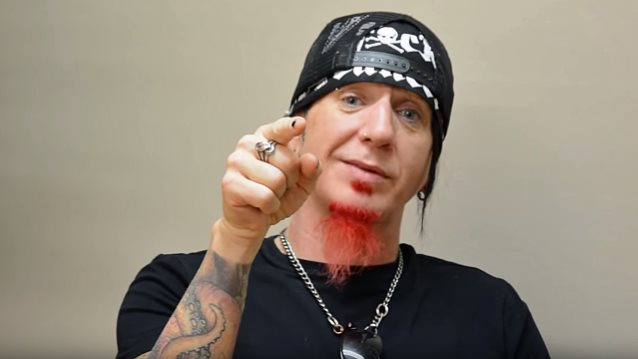 Hales and Baker of the Columbus, Ohio radio station 99.7 The Blitz conducted an interview with HELLYEAH singer Chad Gray at this year's Rock On The Range festival, which was held May 20-22 in Columbus, Ohio. You can now watch the chat below.

Speaking about HELLYEAH's forthcoming fifth album, "Unden!able", Chad said: "It's very us. Since we started writing, since we started HELLYEAH, when we got in a room the first time, we wrote a song, and then we wrote another song, and then we wrote another song. We don't sit around, and we record everything, so we make sure that we've got all the ideas [on tape]. We don't, like, go in a direction. It's almost kind of whatever mood you wake up in; you wake on the wrong side of the bed, you get 'X'. If you wake up on the right side of the bed, you get 'Love Falls' or 'Human' or something like that. It's a matter of mood, man. It's a matter of just being honest in yourself and being honest to the song, let the composition speak for itself. So there are definitely many moods and many levels to this."

Chad also talked about the new album's first single, "Human", which is described in a press release as "HELLYEAH's version of a power ballad, with an emphasis on 'power.'" He said: "'Human' has been awesome live. We actually played one of these festivals last week, and half way through it, we were playing 'Human', we were in the middle of the first verse, and the sound went out, and the entire crowd was singing the verse — loud — like they were singing the chorus, but it was the verse. And that really resonated in me, that there is something special about to happen. And I think we started making that turn… we call it turning the barge around. You're kind of steaming up river one way, and then you kind of just wanna get back to your roots, you wanna get back to your metal roots and who you are as a person and why you started doing this. So you start that slow turn. The slow turn started with [2012's] 'Band Of Brothers', and then it kind of got almost turned around with [2014's] 'Blood For Blood', and now we're steaming down river with 'Unden!able'. I mean, we know our identity; we know who we are."

As previously reported, "Unden!able" will feature a cover version of the song "I Don't Care Anymore", which was written, performed, and produced by English singer-songwriter Phil Collins for his second solo LP, 1982's "Hello, I Must Be Going!" HELLYEAH guitarist Tom Maxwell told Springfield, Illinois radio station WQLZ over the weekend that HELLYEAH's version of the song will feature a special appearance from late PANTERA guitarist "Dimebag" Darrell Abbott.

Maxwell explained: "Dime and Vinnie [Paul Abbott, former PANTERA and current HELLYEAH drummer] recorded that track years ago and we went in and dug up his tracks and put it on the record, man. So we've got a little Dime… Dime's on our album."

"Unden!able" will be released on June 3. The disc marks the first time that HELLYEAH's current lineup — which includes Vinnie, Maxwell, Gray, guitarist Christian Brady and bassist Kyle Sanders — has recorded together as a unit.

HELLYEAH is currently on the road with ESCAPE THE FATE, NEW YEARS DAY and FROM ASHES TO NEW. That trek stops on Tuesday night (May 24) in Louisville, Kentucky and ends on June 5 in Las Vegas. HELLYEAH will then venture out on the "Hell Pop Tour" with IN THIS MOMENT, beginning on June 18 in Des Moines, Iowa.