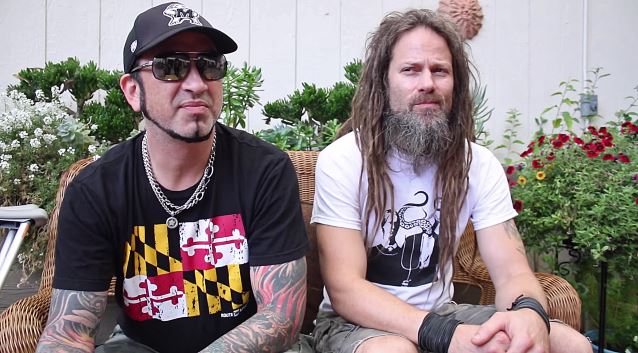 Music Junkie Press conducted an interview with HELLYEAH guitarist Tom Maxwell and bassist Kyle Sanders during this year's Rockstar Energy Drink Mayhem Festival. You can now watch the chat below.

HELLYEAH drummer Vinnie Paul Abbott recently revealed that the band will enter the studio in October with "Blood For Blood" producer Kevin Churko to begin recording its new album for an early 2016 release. Vinnie said: "We're gonna spend three months in the studio with [Kevin], and the record will probably be out around March or April next year. So we're gonna keep the pedal to the metal and keep kicking ass."

In a 2014 interview with This Is Not A Scene, Vinnie Paul stated about working with Churko on "Blood For Blood": "Kevin really knew how to get the best out of us, and it was really refreshing for me to be just 'the drummer' for a change. Five years ago, I bought a house in Las Vegas and that's also the city where Kevin works from. So every now and again we've bumped into each other and we were discussing working together at some point. I'm big fan of his work with Ozzy Osbourne and all the other productions he has done, and he's a big fan of the things I've done. So when we got to the point in the band that we wanted to work with an outside producer, it was a no-brainer to work with him. He also got along great with Chad [Gray, HELLYEAH singer], which really smoothed the ride when it came down to record the vocals."

"Blood For Blood", was the band's first release since parting ways with guitarist Greg Tribbett and bassist Bob "Zilla" Kahaha in 2013.

The new members of HELLYEAH are Sanders and Christian Brady.

"Blood For Blood" sold around 17,000 copies in its first week of release to land at No. 18 on the Billboard chart.