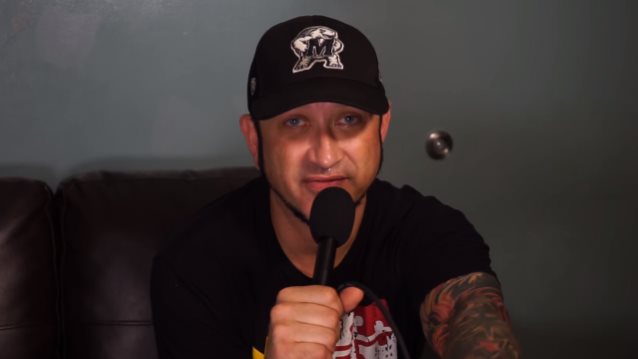 Finland's Kaaos TV recently conducted an interview with HELLYEAH guitarist Tom Maxwell. You can now listen to the chat in the YouTube clip below. A few excerpts follow (transcribed by BLABBERMOUTH.NET).

On why so many new rock bands are having a difficult time selling records in the digital age:

Tom: "Well, people don't wanna buy dogshit. You know what I mean? I think that's why. That's really basically what it comes down to. There's just so much oversaturation and just so many bands, and none of them sound original; everybody sounds like the band you just listened to before. I put on a heavy metal radio station here in the States, [and] nine times out of ten, I can't tell who's who. So why would people go out and spend good money on music that fucking sucks? So, yeah, I get it [why] people will buy one or two songs at a time, because usually that's the only… most records only have one or two good songs nowadays, so why would they wanna go spend all their money on a whole record that sucks ass.

"If you really dig deep and put together a record — from song one until the end — that is just great, and you don't have any songs that you fast-forward to the next song for, then, you know, they might need that record, they might need to have all of it, the whole package, not just one song.

"I think with technology nowadays, with, obviously, all the downloading an streaming, it gives people an opportunity to listen to your record and judge whether they wanna go out and buy it or not. So, yeah, I think if more bands put more time and quality into the writing, they might actually sell more records."

On whether it still makes sense for bands like HELLYEAH to release full-length albums:

Tom: "You know, I don't know. I kind of battle with that decision too sometimes, whether it's worth doing whole records. Sometimes I wonder if it'd be better off just writing an entire record but releasing it in increments, you know what I mean? Like, three songs a quarter or something — just have something special for them to listen to every time. But most record labels won't do that, because retail buys all the records upfront, so, yeah, they want their money; they make money off a CD still, because retail pays upfront. You can't really make sales when you're releasing things virally, I would say, so they still wanna get paid for those hard copies."

On whether he thinks YouTube and other streaming services are good for newer bands:

Tom: "Sure. I mean, any kind of promotion, anything you can use to promote your band is good. Nowadays I wonder if making videos is worth it anymore, but our 'Moth' video has been shown over ten million times, so people are watching. I think there's good and bad in all the technology. You can't just look at it as all bad. It's a double-edged sword; there's good and there's bad. You just have to use the good to your advantage and try to work around the bad and strategically do things that will benefit you in a world where streaming, for example, could be a problem for most people. [You have to look at it] as a tool to get the music out there to more people."

On whether he uses Spotify himself:

Tom: "Yeah, I mean, sometimes; sometimes I'll put it on. I don't really see the big deal. Some people get pissed off that their music is up there, but unless you're selling five million records a week and it's affecting your sales to that extent, then, yeah, it might be an issue for somebody who can't afford to put a brand new Jacuzzi in their palace or whatever. But for upcoming bands and bands that aren't really selling or making the kind of music [that results in those kinds of] record sales or whatnot, yeah, you need it. Why not? What's the big deal? It's just another tool for people to hear your music."

HELLYEAH's fifth album, "Unden!able", will be released on June 3. The disc marks the first time that HELLYEAH's current lineup — which includes Vinnie, Maxwell, Gray, guitarist Christian Brady and bassist Kyle Sanders — has recorded together as a unit.