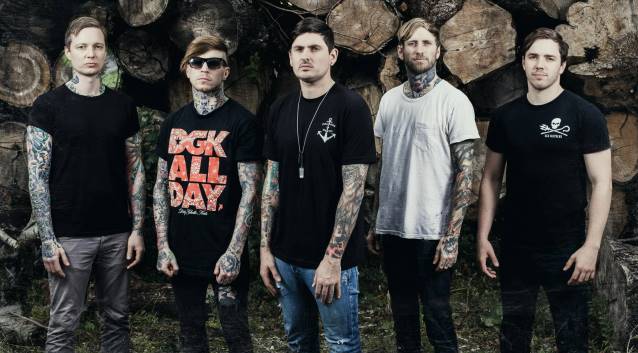 Australian metalcore outfit I KILLED THE PROM QUEEN recently signed to Epitaph Records worldwide. The band has just finalized the recording of its new album in Gothenburg, Sweden with producer Fredrik Nordström (BRING ME THE HORIZON, AT THE GATES, IN FLAMES, DIMMU BORGIR, ARCHITECTS), with plans to release the new material in 2014.

A trailer for the CD can be seen below.

Following his stint with BRING ME THE HORIZON, songwriter and guitarist Jona Weinhofen returns to his role in I KILLED THE PROM QUEEN and he states: "We are absolutely ecstatic to join the Epitaph Records family. Having worked with the label previously with BRING ME THE HORIZON, I knew exactly what Epitaph was capable of and that it would be the perfect home for I KILLED THE PROM QUEEN.

"Epitaph is already the home to so many of our heroes such as CONVERGE, REFUSED, PENNYWISE and EVERY TIME I DIE, and has helped launch our good friends PARKWAY DRIVE, THE GHOST INSIDE, DAY OF CONTEMPT, LETLIVE. and more. To say that we are a part of this family is truly an honor."

Weinhofen continues:  "We are dying to get this album out and into the hands of old and new I KILLED THE PROM QUEEN fans everywhere.

"To me, this record feels as though I KILLED THE PROM QUEEN never took a break and is a natural progression of the band. You will hear hints of our side projects and new influences, but make no mistake, this is an I KILLED THE PROM QUEEN record through and through. It's fast, melodic, heavy, catchy and we have added a couple of new elements which really bring it up there with the level of music being created these days."

I KILLED THE PROM QUEEN is also making plans to tour in 2014 in support of the new album.