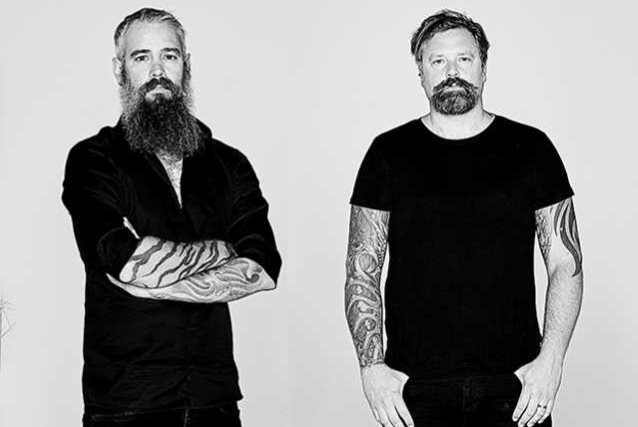 IN FLAMES guitarist Björn Gelotte says that bassist Peter Iwers left the band at the end of last year because he was "done" with the touring lifestyle.

Iwers issued a statement in November saying that he was exiting IN FLAMES "to pursue other endeavors." He has since been replaced by Håkan Skoger who made his live debut with IN FLAMES on their recent European tour with with AVENGED SEVENFOLD and DISTURBED.

Asked by Mick Burgess of Metal Express Radio why Iwers chose to depart IN FLAMES after almost twenty years with the band, Gelotte said (hear audio below): "He's always been a very busy man, and I think he was just done with this life. He's still writing music, playing music with friends in different constellations. [Peter and I] have [a] bar together [in Gothenburg, Sweden], 2112, so he's busy doing that. He has a brewery together with the old drummer from IN FLAMES, Daniel [Svensson], so he's a very busy man."

Björn also spoke about Skoger's addition to IN FLAMES, saying that the bassist is "an old friend from the same area where I'm from in Gothenburg. He played with Anders [Fridén, vocals] and Niclas [Engelin, guitar] in PASSENGER, which was a side project they did. He was also in GARDENIAN, which is one of Niclas's early bands. And I think he played some with Niclas in ENGEL as well. We just know this guy is awesome when it comes to playing bass. He just hasn't toured that much. The funny thing was, musically, it's not a problem whatsoever, but he was wondering stuff like, 'When we get to the venue, do we get food and stuff?' [Laughs] It was, like, 'What? Are you serious? Is that really your question?' Because musically, this kicks ass."

Svensson announced in 2015 that he was leaving IN FLAMES to focus on his family life. He has since been replaced by Joe Rickard, who played on "Battles" as a session musician.