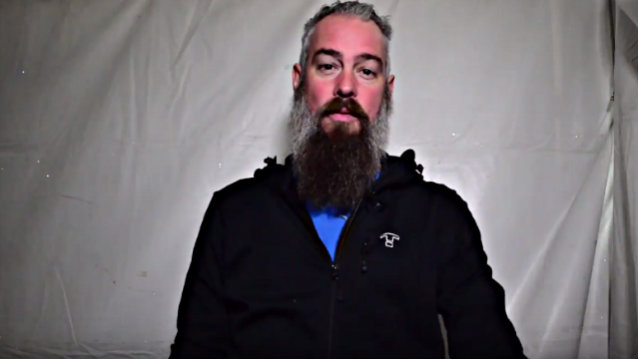 AntiHero Magazine conducted an interview with guitarist Björn Gelotte of Swedish metallers IN FLAMES at this past weekend's Carolina Rebellion festival at Rock City Campgrounds at Charlotte Motor Speedway in Concord, North Carolina. You can now watch the chat below.

Asked how much longer he thinks IN FLAMES can continue touring and making albums, Gelotte said: "If we have as [much] fun as we have right now, I don't see an end to this at all. I mean, we're healthy — [laughs] sort of — and we love what we do. We had some lineup changes, but we found some really good people that are bringing a lot of new energy into the band. 'Cause it is a sad thing when people leave a band; you've been together for twenty years or whatever, or eighteen or fifteen years, and there's always something gonna be missing. But we've been very, very lucky in finding the new guys that we have in the band, and they bring a lot of positive stuff to the table. And that keeps us going on. And loving what we do."

IN FLAMES has recruited Bryce Paul — a member of the Southern California pop-rock outfit IVES — to play bass for the band on their current U.S. tour, which includes a number of headlining shows and festival appearances.

Longtime IN FLAMES bassist Peter Iwers quit the band in November saying that he was leaving IN FLAMES "to pursue other endeavors." His replacement for some of the recent European shows was Håkan Skoger, who had previously played with PASSENGER and GARDENIAN.

Asked by Metal Express Radio why Iwers chose to depart IN FLAMES after almost twenty years with the band, Gelotte said: "He's always been a very busy man, and I think he was just done with this life. He's still writing music, playing music with friends in different constellations. [Peter and I] have [a] bar together [in Gothenburg, Sweden], 2112, so he's busy doing that. He has a brewery together with the old drummer from IN FLAMES, Daniel [Svensson], so he's a very busy man."