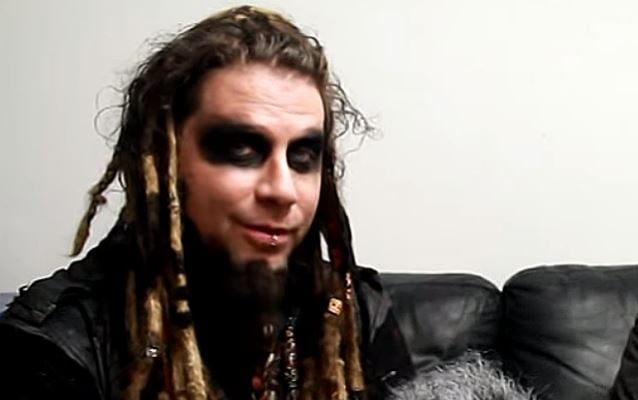 IN THIS MOMENT guitarist Chris Howorth is "determined to continue writing and performing" with his band despite the fact that he has been diagnosed with "acute arthritis" in his neck and shoulders.

Howorth's diagnosis comes less than two months after IN THIS MOMENT was forced to cancel its European tour due to what was described at the time as an injury to Chris's neck.

The guitarist, who co-founded IN THIS MOMENT more than a decade ago with singer Maria Brink, revealed in a new Instagram post that he woke up one day several weeks ago "in severe pain and unable to move my head in any direction; it felt like my neck was fused." Believing that he "must have unknowingly injured" his neck while working the day before in the band storage unit, Howorth immediately sought medical attention. Now, after four weeks of therapy and medication, Chris reports that he is "getting some mobility back."

After receiving his diagnosis from doctor, Chris says that he has accepted the fact that he will have to learn to live with the arthritis "from now on" but insists that he is "determined to continue writing and performing with my band."

He added: "I am gutted that this affected our European tour but I am truly grateful for your support and understanding. We hope to make it up to you as soon as we can. I'm looking forward to seeing friends and fans this summer in the States."

Brink recently ruled out the possibility of IN THIS MOMENT touring with a replacement guitarist, explaining that Chris "is my partner, brother and one of my closest friends. I can't bring myself to do this tour without him. It simply would not be IN THIS MOMENT."

IN THIS MOMENT's North American tour is scheduled to kick off on June 17 in Sioux City, Iowa.

IN THIS MOMENT recently spent time at The Hideout Recording Studio in Las Vegas, Nevada with producer Kevin Churko (FIVE FINGER DEATH PUNCH, HELLYEAH, PAPA ROACH, DISTURBED) working on the follow-up to "Black Widow", tentatively due later in the year.

IN THIS MOMENT will be the special guest on this summer's ROB ZOMBIE and KORN co-headlining amphitheater tour, dubbed "Return Of The Dreads". The trek will kick off in July and will visit 25 North American cities, including Austin, Los Angeles, San Francisco, Toronto, Seattle, Las Vegas and more.