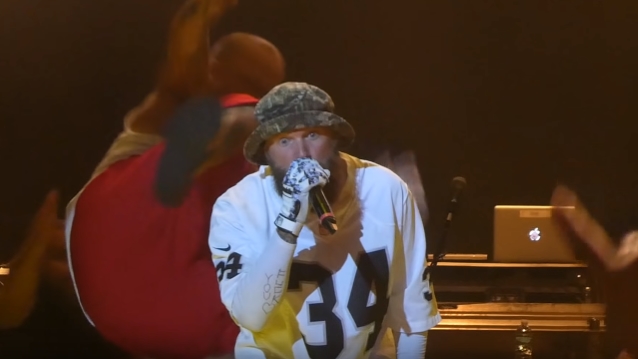 LIMP BIZKIT had just finished performing a cover version of George Michael's "Faith" at the BB&T Pavilion when Joseph William Utsler, better known by his stage name Shaggy 2 Dope, attempted to kick Durst but missed. The INSANE CLOWN POSSE member, whose band performed earlier in the day, was then dragged offstage by security. It is not clear what promted Shaggy 2 Dope's outburst.

Back in 2012, Durst collaborated with INSANE CLOWN POSSE on a cover of AMG's "Bitch Better Have My Money". The recording appeared on "Covered, Smothered And Chunked", the bonus covers album that was sold with the "red pop" version of ICP's "The Mighty Death Pop" LP.

Six years ago, INSANE CLOWN POSSE's Violent J spoke to Hatchet Herald about the Durst collaboration. He said: When we first started touring, LIMP BIZKIT was doing it fuckin' big. As big as possible. They we're definitely mainstream to the fullest. But a lot of the music and their shows were just that dope. Back then, we liked some of what we heard, of course, but we left it alone. I won't lie; it was way too popular for us. But as you know, there's a time limit when you're on top like that. When that time runs out, then you gotta scoot the fuck down over."

He continued: "Here we are a full decade later or so and Shaggy and me are sittin' there thinking of who we could get for these crazy collabos. Who would people never expect to hear on a track with ICP? And who would be down to do it? Bang! Nobody would ever expect an ICP / Fred Durst collabo! We reached out and turns out, and I can't lie, he was cool as fuck. We got him on the phone and kicked it for days. He definitely has mad respect for ICP. He said he's always dug our shit but figured we would hate on him if he ever said anything about it. He was cool as hell about everything. We [were] shocked.

"I sent him two songs to choose from and he chose the remake of AMG's 'Bitch Better Have My Money'. He knocked it out, and he didn't want shit for it. He was just happy and surprised that we wanted him on it."