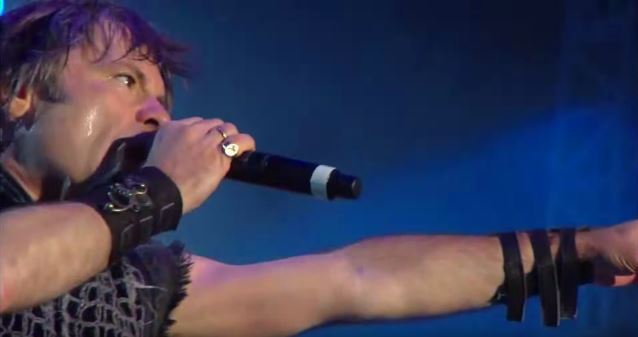 IRON MAIDEN guitarists Dave Murray and Adrian Smith spoke to U.K.'s Total Guitar magazine about the making of the band's new album, "The Book Of Souls", which is due globally on September 4 through Parlophone Records (Sanctuary Copyrights/BMG in the U.S.).

"On previous albums we've usually gone into a rehearsal room for maybe a couple of weeks and maybe have four or five songs under our belts," Murray said. "Then we'd go into the studio and start recording, and the rest of the material would be written while we were there. But this time we went in there with a blank page and a bunch of ideas.

"It was a really fun experience because it keeps you on your toes," added Dave. "You have to be really sharp. We're scribbling guitar chords down, melodies and harmonies, changes… Basically, we were flying by the seat of our pants because we never knew what was coming next. But it was wonderful how things kept flowing."

"The Book Of Souls" will include "Empire Of The Clouds", an 18-minute track penned by singer Bruce Dickinson. The CD was recorded in Paris, France with producer Kevin "Caveman" Shirley in late 2014, with the finishing touches added earlier this year.

"[Bruce] was working on ['Empire Of The Clouds'] for about a month on his own," Smith explained. "Every single day we'd be in the studio blasting out stuff and he'd be in the soundproof glass booth playing piano. Like Beethoven with his ear to the piano, concocting this masterpiece. I think he wrote every single note in it.

"We interpreted it and we did it in sections," Adrian continued. "Kevin and Bruce would be in the control room and say, 'That's too bluesy, can you make it a bit more classical sounding?' He recorded all the piano from start to finish and then we played along to that. Then I think they put on all the orchestration afterwards. It's a bit of a story on its own that one."

"The Book Of Souls" cover art was created by Mark Wilkinson, who has worked with the band previously, and because this 11-track album has a total running time of 92 minutes, it is IRON MAIDEN's first-ever double studio album. There's a broader split on the songwriting compared to previous MAIDEN records, with bassist and founder member Steve Harris contributing to seven of the tracks; six of them with MAIDEN's guitarists and one sole composition. This is also the first time since 1984's "Powerslave" that an IRON MAIDEN studio album also features two tracks written solely by Dickinson. And also two Dickinson/Smith collaborations.