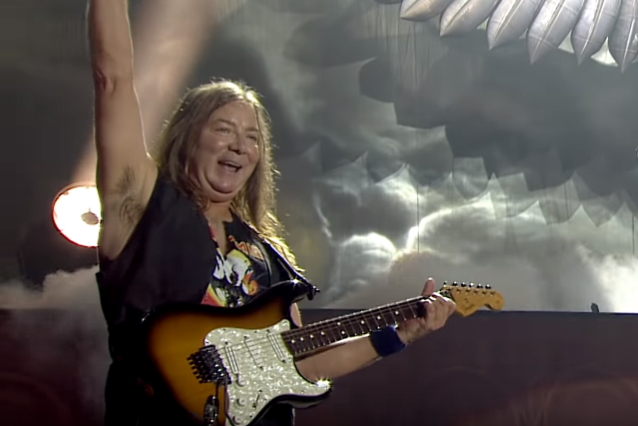 IRON MAIDEN guitarist Dave Murray spoke to Forbes about the band's current setlist, which includes two Blaze Bayley-era songs, "Sign Of The Cross" and "The Clansman". Asked why was it important to the band to still play those songs even though Bruce Dickinson has been back in the band for so many years, Dave responded: "Personally, I didn't have a lot to do with the songs being put together. But I think those songs are classic. They have everything MAIDEN is about: the quiet intros, lots of time changes, they’re very uptempo and quite lengthy. They're also really good to play live. Even though they were from the Blaze era — it doesn't matter because it's still IRON MAIDEN as a band. Bruce sings them absolutely amazing. We're still using everything that IRON MAIDEN has done. It's not like we're not going to do a song because it was that Blaze era. We wanted to incorporate every aspect of IRON MAIDEN's history, regardless of the year. And we like to give fans songs they can sing along to."

Dickinson told the "Rock Talk With Mitch Lafon" podcast that he never had any issues singing the Bayley-era MAIDEN material. "Life's too short to go around chucking your ego around like that — it's childish, it's stupid," he explained. "And, actually, some of those songs kind of worked [with my voice], some of them didn't, but you know what? They were all songs which a lot of IRON MAIDEN fans bought, and some of them, in particular 'The Clansman' and 'Sign Of The Cross', I think we really nailed those songs and I thought it was great material. Blaze's voice, obviously, was quite different than mine — it was a slightly lower register — and, actually, I wasn't complaining, 'cause I could use this kind of lower baritone tone and get quite kind of robust on it all. And I really enjoyed singing those songs."

Dickinson went on to say that he "had the utmost respect for Blaze, because he stepped into a situation that was extremely difficult for him. Because, manifestly, his voice was so different to mine and yet he had to try and sing some of those [older IRON MAIDEN] songs. He was in a difficult place. And he was a very, very nice guy, and still is a very nice guy, and I have a huge amount of respect for him."

Dickinson told the "Do You Know Jack?" radio show that he "was surprised" Blaze was chosen to replace him in IRON MAIDEN. "I was delighted for Blaze, but there was a whole bunch of other really good singers out there," he said. "I thought 'Wow, they could have picked somebody with a voice that could do what my voice did.' But they picked Blaze. Obviously, they picked somebody different, but that came with its own set of challenges. I just wondered whether anybody in the management was really giving anybody any serious words of truth on how hard this could be."

IRON MAIDEN kicked off the 33-city North American leg of its "Legacy Of The Beast" tour on July 18 at the BB&T Center in Sunrise, Florida.

MAIDEN's current set includes a Spitfire buzzing the stage during the opening number, "Aces High". The plane is a 90-percent-sized replica of an actual Supermarine Spitfire Mk Vb registration number AA 853 from 302 Squadron that saw active duty in 1941.

Support on the North American leg of the "Legacy Of The Beast" tour comes from THE RAVEN AGE. Additionally, FOZZY will be guests for the Banc Of California Stadium show in Los Angeles.

MAIDEN's 2019 North, South and Central America trek comprises 44 shows in six countries, which, combined with the band's 2018 European dates, means that by the end of this tour, the group will have taken the "Legacy Of The Beast" show to over one and three quarter of a million fans around the globe.